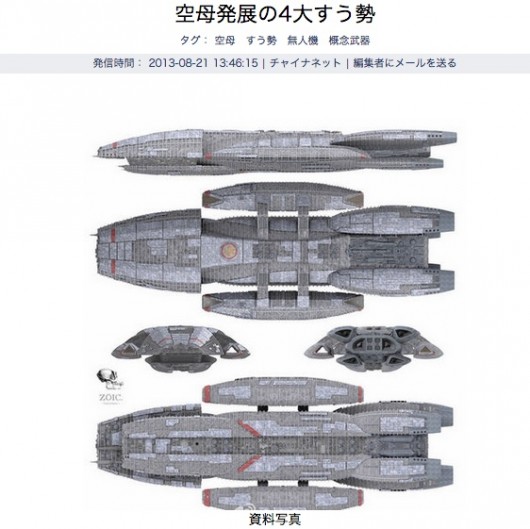 There will be no admonishing in this post, because anything that gets Battlestar Galactica in the news is a-okay by us. A recent article on the Japanese-language version of the website for the China Internet Information Center featured pictures ripped straight from BSG and passed off as futuristic military technology.

“Are these graphics from a video game?” one netizen wrote, while others said that the pictures looked reminiscent of Macross, a Japanese animation which debuted in 1982 and featured futuristic robots and spaceships.

Eventually, savvy internet users deduced that one of the pictures was a schematic that had been used by the animation studio responsible for the visual effects in the American science fiction television programme Battlestar Galactica. The other image was a concept design for a “Lilypad” floating city, created by Belgian architect Vincent Callebaut, which has also created similar mock-up images for sustainable structures in Taipei and Shenzhen.

The article, titled “4 Major Trends In Aircraft Carrier Development,” was published on August 21. It’s too bad the editors didn’t do a bit more research and come upon the schematic for Cylon Centurians. Heads would have exploded!

We now eagerly await the follow-up report on the future of gene splicing between alien races, featuring Sarah Kerrigan.