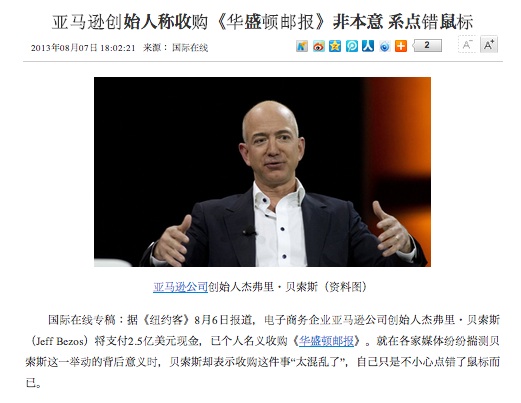 Xinhua News Agency, the Chinese government’s mouthpiece, translated verbatim a New Yorker magazine satire and published it as real news on its International News Online section. The New Yorker piece, written by satire columnist Andy Borowitz, says Bezos’ purchase resulted from an unintentional click of the mouse, and that he has been negotiating with the Post’s customer service department to retract it. Not realizing the news’ satirical nature, People’s Website, operated by another Chinese state newspaper, People’s Daily, also reprinted  the Xinhua translation.

I don’t know which of these first three paragraphs from Borowitz’s story didn’t tip off the Chinese news editors that this was NOT A REAL STORY, but perhaps this is where we simply tip our hat and give credit where it’s due:

Jeff Bezos, the founder of Amazon.com, told reporters today that his reported purchase of the Washington Post was a “gigantic mix-up,” explaining that he had clicked on the newspaper by mistake.

“I guess I was just kind of browsing through their website and not paying close attention to what I was doing,” he said. “No way did I intend to buy anything.”

Mr. Bezos said he had been oblivious to his online shopping error until earlier today, when he saw an unusual charge for two hundred and fifty million dollars on his American Express statement.

Or has Xinhua slyly opened a humor/troll section without telling anyone?

The Borowitz Report has gotten Chinese media before (it’s because it’s hosted on The New Yorker, of course). In April, 21st Century Business Herald was snared by a piece of satire that claimed Kim Jong-un wanted to declare war on Microsoft.