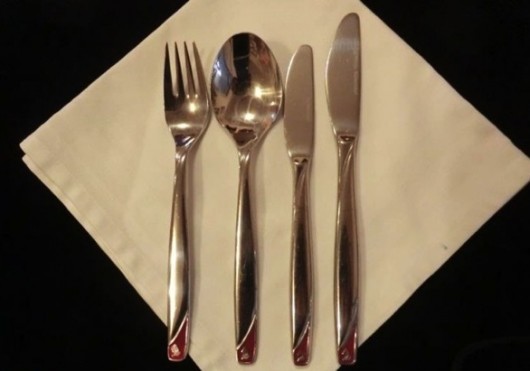 In the latest controversy involving Chinese tourists – a group of mainland travellers have upset Singapore Airlines staff by refusing to hand over 30 sets of stainless steel tableware during a recent flight, Chinese media reported.

That’s from SCMP, which continues:

The Chinese passengers were on a tour of Singapore, Malaysia, and Thailand. While onboard the Singapore Airlines flight,  they had intended to keep the stainless steel knives and forks provided during a meal, the Qianjiang Evening News reported on Tuesday.

The utensils were apparently stainless steel and reusable, so naturally, airline staff weren’t happy. Neither were the tour guides in charge of these wonderful travelers.

The affair finally ended when the guide told the tourists they were hurting China’s image abroad. “Stop hurting the reputation of Chinese people,’’ he said.

Better or worse than getting drunk on a flight and trying to take away a bottle of wine?

For reasons that will not surprise anyone, the behavior of Chinese tourists has been in the news lately. No, it’s not good.

“Why Do Chinese Tourists Have Such a Bad Rep?” goes this Andrew Sullivan blog post (and here’s part two!). Basically, just a bunch of anecdotes of Chinese tourists behaving poorly. Maybe you’ll want to only skim a few lines, lest you get the impression that all Chinese travelers are like this.

Bad apples abound though, as they statistically would when a country sends so many tourists outside their borders every year. In this case, the travelers’ mistake was thinking they could steal in bulk. One or two sets of cutleries wouldn’t have raised any eyebrows. Thirty? Yeah, they’ll stop you then, probably just to make you understand your own stupidity more than anything else.