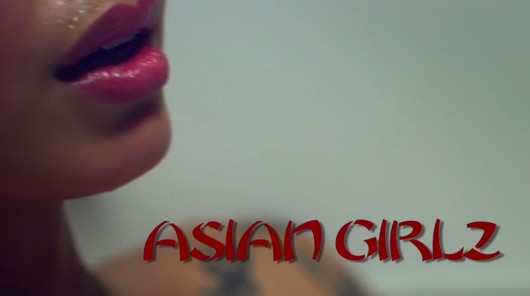 Following two days of criticism on blogs, national news outlets and social media (and even a change.org petition) for the video that set the landspeed record for crude sexual and racial references toward people of Asian descent, the Los Angeles-based outfit held their ground and did nothing to address their critics aside from offering a slightly less offensive video description, which in turn generated even more outrage for their failure to even make an attempt at being contrite.

As the story went viral late Wednesday and throughout Thursday, the administrator of the band’s Facebook page was active in adjusting photos and editing avatars (but not removing “Asian Girlz”-related content, including promotional materials and shots of the band with Levy Tran, the Vietnamese-American model who has since distanced herself from the project), as if they were sprucing the place up for an inevitable visit from the major labels offering them a record deal.

It wasn’t until the House of Blues announced on Thursday afternoon that the West Hollywood venue was dropping them from a scheduled performance and video screening on August 10 that the band attempted to paint the trainwreck off as misinterpreted satire with a second revision on YouTube.

“This video is intended to be a satirical, provocative, absurd, & even silly work of art,” the band said on Friday morning. “The lyrics, story, and visuals are so completely over-the-top and ridiculous that we thought it’d be impossible to miss the point.”

The defiant statement sarcastically thanked Angry Asian Man for bringing it to the public’s attention and announced that the video will remain public for the next 48 hours so those who haven’t seen it yet can get their yearly fix of stupidity in one potent dose.

And taking a page from the Official Playbook of Racial Insensitivity that dictates how the victims of racism should feel after being assaulted, the band urged those who were offended to “just step back, take a breath and relax.”

While we’re used to batting away the justifications sputtered by the blithe defenders of casual racism every time something like this happens — classic arguments include the “I Am This Race and I’m Not Offended” argument, the “I Have Friends of This Race, So I Cannot Be Racist” argument, the “It Was Only a Joke, So Relax” argument, the “Stereotypes Are Kinda True, So What’s the Big Deal?” argument, the “People of This Race Say This Stuff to To Each Other All the Time, So Why Can’t We?” argument, and the “This Other Person Has Also Done This Racist Thing and People Aren’t Outraged About That” argument — the band took the unusual step of cherry-picking some of these logical contortions made by several knuckle-dragging YouTubers and including them in the aforementioned statement, which is something we’ve never seen before and is a great example of Hanlan’s Razor:

“Never attribute to malice that which is adequately explained by stupidity.”

Shortly after the band told TMZ on Friday evening that they were yanking the video on Saturday after receiving threats, a commenter named Bone Shaker appeared on YouTube and offered a plausible alternative (and completely unverified) explanation that appears to mesh with the band’s unapologetic statement and previous behavior:

“The real reason why the band is taking this video down is because they never got signed release forms from the locations they filmed at,” wrote Bone Shaker from a recently registered account with no previous activity. “It wouldn’t have been a problem if no one saw this video, as they probably assumed would happen. But since this blew up, all these locations are now contacting the band and telling them to take those scenes out cause they don’t want their business to be associated with this crap. So don’t be fooled by their ‘noble’ gesture of pulling the video from YouTube.”

Asian American media appeared to be divided on how to address the issue as the story became unavoidable. Some outlets, namely the popular lifestyle magazine Hyphen, openly questioned how to discuss the video without publicizing the band’s toxic message (taking a cue from community activists Jeff Yang and Bao Phi, they opted to post a list of 47 Asian-Pacific American female musicians entitled “Feed the People, Not the Trolls”) while others opted to use the flap to directly dive into a discussion when it comes to the prejudice directed toward people of Asian descent in American society.

“Day Above Ground draws upon a centuries-long white European and American colonial obsession and misrepresentation of Asiatan sexuality, from Marco Polo to Miss Saigon, Full Metal Jacket to the Hangover Part 2,” said Alison Park Roh, a professor of Asian American studies at Hunter College, in a statement that was published on the race-themed pop culture blog Racialicious on Friday.

“Not only are they misrepresenting us in a viral fashion, they are directly contributing to a pervasive history of white supremacist male violence against Asian women. That violence is rooted in the American government going to Asia to extract resources and cheap labor and American men going to Asia to restore their sense of a ‘lost’ masculinity — both at the expense of millions of peoples’ humanity, lives and livelihood, and a legacy that Asian American women have to live with to this day.”

While Asian Americans appear unified in their disgust, some commenters on social media disagreed with the premise of using the video as a launchpad for a soul-searching national discussion.

“This is a faulty way of opening dialogue because the content has propagated so much hype that the only responses are irrational and trite ones coming from outspoken (but not eloquent or critical) participants,” wrote a commenter on the social news website reddit on Friday afternoon in a thread about America’s double standard when it comes to the notion that it’s okay to mock and belittle Asians but not others.

“I think a more constructive approach is to analyze the song as one of a series of examples marking a definitive change in internet culture and social trends,” he continued. “The band is not special for arranging casual racism and sexism in song form, but the work follows a pattern of making generalizing statements under the excuse of satire or proclaiming identity.”

“It’s acceptable to make fun of Asians because nobody is scared of us,” said another. “We are not intimidating or threatening in any way. And we haven’t been wronged by white America like blacks have been wronged, so there’s no reason to tippy toe around us. Those are some common sentiments about this issue, not necessarily mine.”

Angry Asian Man, which ignited the firestorm, hasn’t followed up with a blog post on “Asian Girlz” since its original post on Tuesday afternoon. The blog has, however, written about stuff that’s more infinitely more deserving of your attention, like Take Your Shot, a contest for aspiring Asian filmmakers, and the music video for Kesna, a collaboration between vocalist Esna and hip hop MC and producer Kero One.

We reached out to Day Above Ground singer Joe Anselm on Friday afternoon — the guy with the frosted tips who we referred to as a “dead-eyed sociopath” in our original post — to ask him what everyone is dying to know: “What? Why? How? Gah!”

Perhaps unsurprisingly, Anselm ignored all of our questions — namely “What the hell were you thinking?” — and simply said, “It’s not racist” and, “It is a work of art that, if you are an artist, you stand behind.”

We will undoubtedly find more to write about this trainwreck of supernova proportions as the saga continues. Stay tuned.

UPDATE, 8/5, 2:37 am: Despite saying they’re removing the video and duping media into writing headlines that imply the video has already been removed, Asian Girlz remains readily viewable on YouTube, 1.3 million hits and counting (4,257 likes, 29,516 dislikes).

I just wanted to clarify some things about the inspiration for our new song/video “American Dream” & the immediate action we took to get it out to the people, was to basically dispel the myth that we are racists, sexists, or just bad people. We are a rock band that made a raunchy, satirical song. That is all. And we want to continue down the road making music we like to make, no matter what comes out. We are also embarking on a 10 week promotional campaign for “American Dream” to allow the people to make up there mind on how they want to see Day Above Ground.

19 Responses to “Day Above Ground Says Its Racist Video Is “Art,” Tells Offended Parties To “Step Back, Take A Breath And Relax” [UPDATE]”