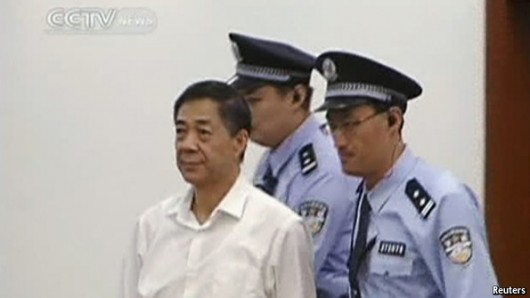 Curiosity and excitement in the Bo Xilai trial has turned into resignation and despair, expressed through humor with an undercurrent of sizzling anger. Good for those of us who aren’t wasting a second day in Jinan, Shan-fucking-dong.

Indeed, the Weibos have gone quiet.

Last weibo from the court came almost 90mins ago. No updates on Bo trial this morning

Worst-case scenario for Bo Xilai – life sentence sharing a cell with his wife?

Patience, journalists! We've been working since 2am on today's trial transcript.

We’ll have another update in a little bit. (Update, 12:49 pm: video of Gu Kailai’s testimony!) In the meantime, perhaps you’d like to catch up on some Bo Xilai reading from day one.

Denial. “Fallen politician Bo Xilai put up a feisty defense on Thursday as he faced China’s most political trial in decades, saying he was framed in bribery charges against him and had admitted to them under psychological pressure during interrogation.” (Reuters)

Aw, Gu Kailai misses her husband. “The wife of a disgraced Chinese politician turned on him during his corruption trial Thursday, saying he filled the family safes with cash and admitting she spent huge amounts.” (Behind the Wall, MSNBC)

And he… kind of misses her. “Mr Bo was no less scathing about his wife, Ms Gu, who is serving a suspended death sentence (almost certain to be commuted to life or shorter) for murdering a British businessman. Referring to her in absentia testimony relating to the bribery allegations, Mr Bo called her words ‘very ridiculous and very laughable.’ Much of the evidence cited by the prosecution he dismissed as ‘irrelevant’ or ‘peripheral.’ One of Mr Bo’s lawyers said Ms Gu’s testimony should be disregarded because she was mentally disturbed (the prosecution replied that she had recovered sufficiently when she gave it). The defence also accused Ms Gu of being ‘in the habit of lying.’” (Analects, Economist)

Bo’s “other son.” “The elder son of ousted Chinese politician Bo Xilai has thanked authorities for allowing his father ‘to speak his true mind’ at his trial and said Bo has stood by his ideas despite an investigation that lasted 500 days, the New York Times said. // Bo put up a feisty defense on Thursday at the start of China’s most political trial in decades, saying he was framed in bribery charges against him and had admitted to them under psychological pressure during interrogation. // In a statement posted on the New York Times website late on Thursday, Li Wangzhi, Bo’s son from his first marriage, said he has ‘been subjected to pain and sadness’ for Bo, but is proud of his father’s strength.” (Reuters)

“How Bo Xilai Split the Party and Divided the People.” (ChinaFile) 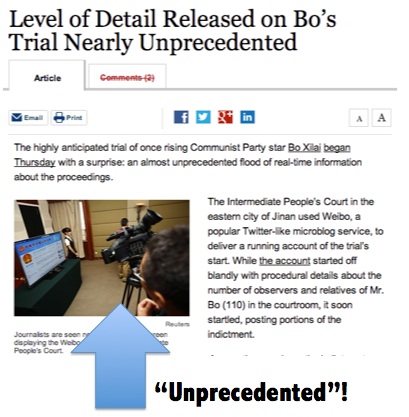 But seriously, social media, get your act together.

Hard to read weibo silence as a sign that yesterday went according to plan.

One Response to “Is Bo Xilai Trial Almost Over? Weibo Updates, Where Are You? And Other Stories From Day 1”