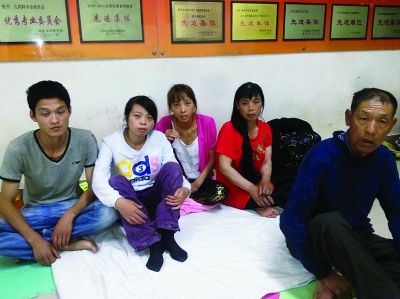 According to her doctor, the needles were aligned perfectly, which means it was no accident. So the hospital reported the case to local police.

When thousands of Chinese netizens put their heads together trying to find out clues about who the criminal is, the baby girl’s father Yin Zhihe delivered himself to the police on Aug. 25.

You’ll not quite believe the reasons for the piercings.

Why a father can be so cruel to his own flesh and blood? Superstition. In many rural areas in China, there is the belief that if one pieces his/her first daughter, then the next child will be a boy. Yin is apparently one of the believers.

Holy shit… this dude wants a second child. We’re completely against forced abortions, but not forced vasectomies. Give this guy one, ASAP, and humanity will be better off. The father who put his toddler in a plastic crate and dragged him behind a motorbike — this man here — is Andy Griffith compared to Yin Zhihe.

The Yin family is pictured above. From left to right: father, mother, aunt, grandmother, grandfather. I hate to judge by appearances, but there are enough blank looks up there to make meth heads look clairvoyant.

Father pierced 4 sewing needles into 56-day-old daughter, believing the act will give him a son next (Offbeat China)

@beijingcream Latest news says he did it after told by fortune teller that his fate is locked against his daughter's, not for hope of a son