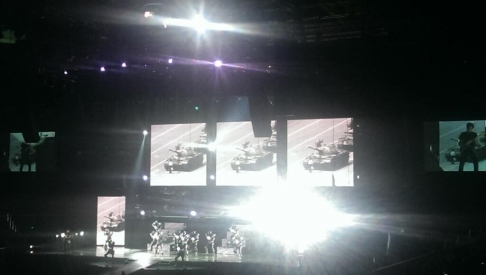 On Friday, the opening night of Cirque du Soleil’s three-night performance of Michael Jackson: The Immortal World Tour in Beijing, a highly sensitive image was displayed on the giant big-screens above the stage in Wukesong MasterCard Arena: the Tiananmen Tank Man. As first reported by a local magazine, then excerpted by Shanghaiist:

This was not some politically-sensitive rock concert, but the opening night of Cirque du Soleil’s Michael Jackson ‘The Immortal’ world tour, where during the climax of the track “They Don’t Care About Us” the image appeared momentarily for a total of about four seconds within a montage sequence of civil-rights style protest movements, resulting in an audible collective gasp from the audience.

The image, although recognized throughout the world, has been almost completely erased inside of China, where any mention of the events surrounding the protests remain strictly forbidden. The response of the audience (or at least those sat around us) suggests, however, that the image is still recognized, even when taken out of context.

Laura Silverman, publicist for the Michael Jackson world tour, emailed us this statement:

Cirque du Soleil has abided by all the rules that were required by the Chinese Ministry of Culture including submitting the full show for approval. The show that is being presented here in China is the same show that has been touring the world for almost 2 years.

So, the Ministry of Culture knew. Or… “knew.” Someone in that office obviously didn’t pay very close attention to what was submitted. Maybe the chap just wasn’t a Michael Jackson fan. Maybe he was too riveted by a game of Glorious Mission Online.

Yes the show in its entirety was submitted for approval. The image is no longer in the show.

I think what we have here is a pretty fascinating glimpse into how big shows are screened in a politically sensitive environment such as China: by humans, who are fallible.

If the Ministry of Culture got in touch with Cirque du Soleil after this incident — to this question, Silverman offered no reply — we surmise the conversation was brief but polite, with a firm demand. The image is no longer in the show. And the show went on.

Michael Jackson: The Immortal World Tour played in Beijing on Saturday and Sunday. We’ve been in touch with four people who were present, and none of them sensed anything was amiss. The Tank Man image, indeed, was not seen.