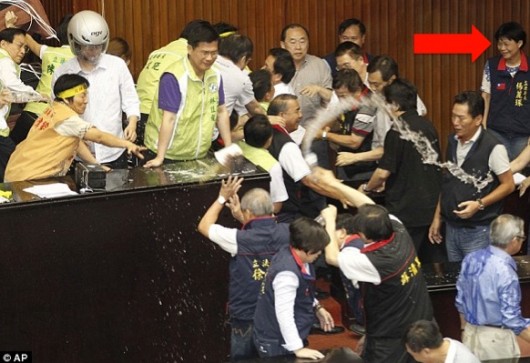 He knows when his shitty day isn’t just any other shitty, boring day. And you can bet he’s seen this before.

So what happened? Daily Mail, take it away:

Taiwanese lawmakers exchanged punches and threw water at each other today ahead of an expected vote that would authorise a referendum on whether to finish a fourth nuclear power plant on the densely populated island of 23 million people.

Nuclear power has long been a contentious issue in Taiwan and became more so following the Fukushima nuclear disaster in Japan in 2011.

While many Taiwanese consider nuclear power generation an unacceptable safety risk for the earthquake-prone island, economic analyses suggest disruptive power shortages are inevitable if the fourth plant is not completed.