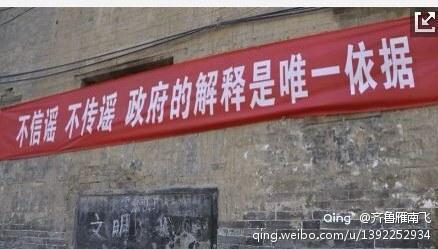 “Do not believe rumors, nor spread rumors. The official government source is the only information you should depend on.”

After locking someone up for misreporting the number of deaths in a traffic accident as 16 when it was really 10, and someone else for saying seven died in a different traffic accident when the real answer was three, and smearing Charles Xue, authorities apparently still believe their anti-rumor-mongering campaign is effective. In Qinghe, Hebei province, they’ve used it to net another victim recently:

That’s via Hug China, which continues:

On the night of August 26th, a vigilant Qinghe police noticed a post by a netizen nicknamed 宁05021 in a questioning tone ”I heard that there happened a murder case in Louzhuang, anyone knows the truth?”

The post was read only 1,000 times before the police showed up, thinking “the post disturbed social order and caused panic among the masses.”

After receiving confirmation from relevant departments that no murder happened in Louzhuang, the police identified the post as rumor and took swift action and captured a 20-year-old woman surnamed Zhao on August 28.

Everything you say on the Internet must be factual. Got that? Otherwise, jail for you!

5 Responses to “Anti-Rumor Campaign Puts Another Microblogger Behind Bars”