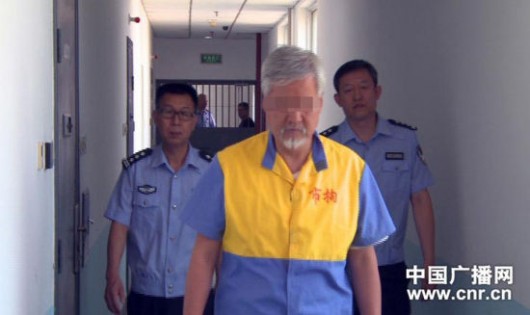 Whatever happens in the privacy of one’s home is apparently not always private, especially if you’re a notorious rabblerouser with 12 million followers on Sina Weibo.

Chinese American Charles Xue, aka Xue Biqun (and Xue Manzi on Weibo, an anti-trafficking and environmental adovcate), was captured in Beijing last Friday for soliciting a 22-year-old prostitute. That’s hardly the end of the story though. In the past week, authorities have gleefully smeared him in public, including on, it seems, every CCTV news broadcast, emphasizing Xue’s confession and his love for sex parties. LOCK HIM WITH THE PEDOPHILES!

There was also this story from Global Times, a publication unashamed about doing others’ dirty work, in which Xue is painted as a slick, dissolute, late-paying john who prefers ’MERICA! over his motherland:

Local police said on Wednesday that when they found Xue, he first said he was an American citizen and claimed he would call his lawyer to handle this.

…Sex workers could only identify Xue by seeing his face as he had never revealed his name or any other personal information.

…Xue called one pimp, surnamed Ma, and asked her to introduce a girl to him the day before he was detained, but Ma refused, claiming Xue habitually delayed paying.

…Xue was disgruntled and went to where Ma lived. Ma was ordered to find four girls then Xue had sex with three of them.

We could almost call it a wider sting against freedom advocates. We use “freedom” loosely here to mean anyone who attempts to say anything outside of what’s officially acceptable, i.e. possible. They are labeled “rumor mongerers,” a shrewd designation, since no one likes bratty-tatty types, as even American middle school girls can tell you.

And that netizen who “slandered” the Eighth Route Army – away you go. And this, via SCMP, which almost seems too outrageous to be true, but isn’t actually all that shocking when you consider the person in charge of enforcing nebulous “anti-rumor-mongering” laws just might be your local central Anhui city’s deputy of the Public Security Bureau (who we bet is — rumor alert! — a chain-smoking lardhead with a 21-year-old mistress):

In an act that has outraged China’s online community on Thursday, police in central Anhui province detained an internet “rumour-maker” after he said 16 people died in a traffic accident – which officials had claimed only killed 10.

Lest you think that was a one-off, in Shiyan, Hubei, a netizen was detained for reporting the number of dead in a traffic accident as seven, when it was three.

If an official lies about his office’s tax revenue, if a real estate mogul withholds relocation payments, if a mayor starts a riot by disseminating outright lies about, say, power plant construction plans, CCTV will likely not care unless — and this is goddamn irony here — it’s exposed on Sina Weibo first, and authorities don’t delete the posts. But if you’re a blogger who misreports a death toll, RUMOR MONGERER, OFF TO THE CLINK.

But hey, at least Charles Xue, that degenerate sex hound, is behind bars. Yay to justice, which continues to judge everyone equally, under the same laws.

4 Responses to “Authorities Wage Campaign On Those They Dislike: The Arrest And Smearing Of Charles Xue”