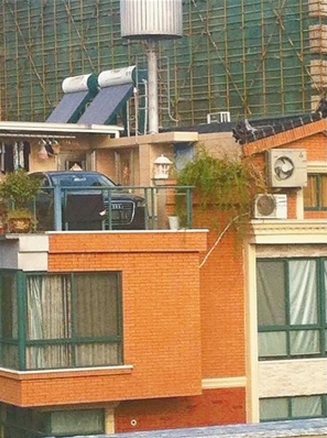 Xinhua interviewed the landlady, who confirmed that she put the car there (with help from a crane, presumably). The Audi belongs to her son-in-law and is being kept hostage because he and his wife owes the family money — more than 10,000 yuan, it seems.

“Why suspend it on top of a roof?” the reporter asked.

“He has the keys,” the woman replied. “One day, he invited his friends over in the middle of the night and planned to drive the car away. I guarded it the entire night.

“Later I thought… this is no way to do it. It’s best to hoist the car onto the roof.”

“After he returns my money, I’ll return his car,” the woman says.

She was unwilling, according to Xinhua, to provide further details.