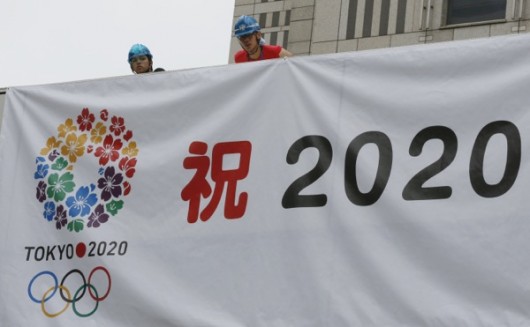 Global Times found a “scholar living in Japan” to write about Japan’s misplaced “Olympics fever” this week, presumably because Global Times writing that editorial itself would have been a bit too ironic, a bit too laughable for even Global Times. Quick excerpt from Jiao Kun’s piece, published yesterday:

Hosting the Olympics is generally believed to bring about positive effects and in particular spur economic development. It needs an enormous amount of investment in infrastructure including all sorts of sports venues as well as operational expenses, several times more than the proceeds gained from television relay and commercial sponsorship. The direct investment will create a good deal of indirect demand, thus stimulating the economic system as a whole and creating more jobs.

However, this view does not hold water, because the investment in organizing the Olympics is, in the final analysis, an input that cannot simply be translated into output.

Part of the investment is sponsored by enterprises and the rest comes from the fiscal budget of the government of the host country, so the Olympic Games, like other public services including unemployment insurance and investment in education, actually reallocates social resources instead of creating wealth.

That last line, the relocation of social resources bit, could well have been about Beijing’s efforts to dust itself off in the lead-up to the 2008 Games. And since we’re on the subject of Olympics fever, can I bring this up?

The fact is, the Olympics are always losing propositions for host countries in terms of money. And yet, despite surely knowing this, Beijing made two bids to grab the Games, both times making it to the final round of voting (in other words, the maximum amount of bribes were given). It was a price they were more than happy to pay, and the reason’s simple: it’s not about recouping every penny of investment, because that money buys a city the chance to stand front and center in the biggest pageant on Earth. How we arrive at this quadrennial event — the backdoor dealings, the corruption, the bureaucratic pissing contests – may repulse us and inspire withering editorials, but the essence of the event, the goal of it, has always remained pure. Unsurprisingly, it’s this aspect of the Games that host countries seize on and use to boast of their culture (London’s Anglocentric opening ceremony), or confidence (a “coming-out party,” in the case of China), or history (Greece), or beauty, or whatever.

Perhaps that’s why Jiao Kun’s feeling a little uneasy. Why Xinhua, subliminally, wished Istanbul had won the rights to the 2020 Games. A close rival just across a narrow sea is preparing to show off its thousands of years of history and culture. Global Times would be downright negligent to its nationalistic base if it didn’t at least try to dampen Japan’s enthusiasm, hypocrisy be damned.