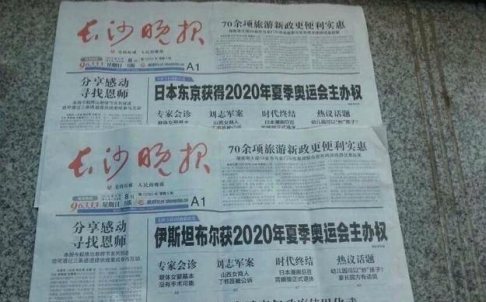 Tokyo is hosting the 2020 Summer Olympics.

A few things are happening here. First, it’s clear that Changsha Evening News feels no need to do fact-checking, because why would it ever fact-check Xinhua, the first and last source of all news in this country? Xinhua could send out a news blast that US missiles veered off course and landed in London, and at least one Chinese paper would splash US BOMBS BRITAIN across its front page.

Second: of all the cities to get wrong, it had to be Tokyo, didn’t it? The capital city of the country that just happens to have longstanding problems — which you might describe, depending on who you are, as “friction,” “acrimony,” or “hatred” — with China.

Finally, Xinhua doesn’t regret shit. It hasn’t acknowledged its error, according to Epoch Times. But it’s not as if people haven’t noticed. A couple of netizen reactions, via Epoch Times:

NJ-Peng comments “Isn’t this ‘speading rumors?’ Isn’t there a serious impact? They [the authorities] arrest [netizens] for ‘spreading rumors,’ regardless of whether or not you apologize. So will the police do anything? Can [the government] ensure equality before the law?”

Zhang Ming, Professor at People’s University of China’s Institute of International Relations, commented on Weibo, “When officials announce mistaken information, they should be held accountable unconditionally. When, however, the officials have no credibility and almost all information is false, then the system won’t question the officials’ lies and rumors.”

Changsha Evening News recalled thousands of newspapers due to Xinhua’s blunder, reportedly at its own expense. Its deputy chief editor wrote on Sina Weibo that Xinhua should “reflect on the mistake,” as SCMP phrases it. We don’t even care if that translation’s faulty, because just picturing that — Xinhua, reflecting on its mistake, what its editorialists have beseeched of countless others — is too rich.

According to people.com.cn, the website of People’s Daily, Xinhua sent a flash at 3.10am saying Istanbul had won the right to host the 2020 Games. A state-owned television station also initially misreported the win.

One Response to “Hey Xinhua, Who’s Hosting The 2020 Olympics?”