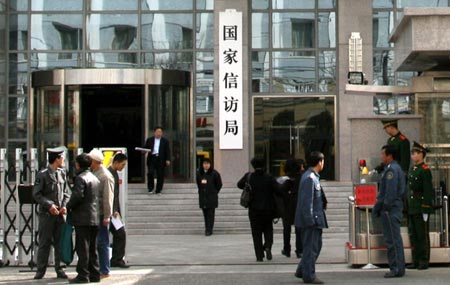 For those who have been wronged in China, the last best chance for official redress is at the State Bureau of Letters and Calls in Beijing. When all other options fail, this is where the people go — and they do, by the thousands, every year, sometimes with little more than a handwritten complaint.

If you’re curious to know what problems these petitioners have, what desires for change or justice they harbor, you’ll want to turn your attention to a series just launched by The World of Chinese, called “Petitioner’s Tales.” The plan is to run one petitioner interview every day week “until they fire me,” says editor Tyler Roney, who writes in the series introduction:

The petitioners who come to Beijing are some of the most diverse, interesting, patriotic, and heroic people in China. These are their stories.

We start with a 48-year-old woman from Hunan province demanding fair compensation for developers building on her land without her consent. Go check it out.

2 Responses to “Petitioner’s Tales: The Complaints You’re Not Supposed To Hear”