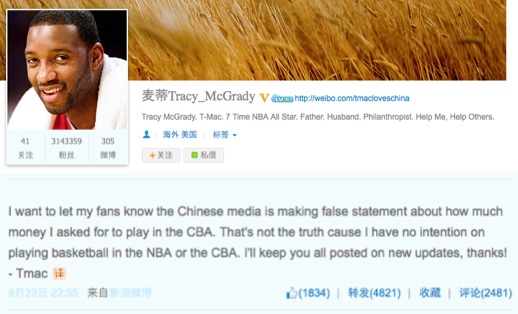 Tracy McGrady appears to be unhappy with reports in Chinese media – from late-August, it seems — that his asking price to play in the Chinese Basketball Association this season was $2 million.

McGrady posted the above message to his Sina Weibo account last Monday, brought to us via The Li-Ning Tower. T-Mac appears to deny that $2 million figure (though he doesn’t say so explicitly), which indeed would be a lot of money for a Chinese team to pay a 34-year-old who doesn’t play defense. He also appears to be saying that he plans on staying retired.

McGrady played the 2012-13 CBA season with the Qingdao Double Star Eagles and had, by all accounts, an eventful year. He then sat on the bench of the NBA Western Conference champs, the San Antonio Spurs, as the human victory cigar.

How upset is McGrady? He’s calling people out by name:

By Yang Yi, he might be referring to the Xinhua editor who wrote this piece, which reports — accurately enough — that McGrady has no interest in returning to the CBA.

Note: it’s possible there’s another Yang Yi, but this Xinhua story is interesting enough in its own right for a couple of excerpts. For a Chinese sports piece, Yang’s write-up is fairly negative. An example:

During his first CBA season with Tsingtao Doublestar, McGrady had some conflicts with Chinese referees. He blamed the referees on his Sina Weibo (Chinese version of Twitter) after a controversial CBA game, and he was fined and suspended for one game as a result.

Yang is referring to the night when McGrady called the refs “three blind mice” on Sina Weibo after a particularly poorly refereed game.

Yang added this bit, which seems like he’s piling on the negativity:

“If McGrady had false illusions that he deserved to be starting, it would be painful to watch him reduced to this role when he’s still only 34,” ESPN commentator J.A. Adande said.

As members of the 1997 draft class, McGrady has become a role player while his peer Tim Duncan remains his superstar status.

In any case, everyone gets upset at Chinese media now and then. Welcome to the club, T-Mac.

We’ll monitor this story and let you know if the tweets get angrier.

2 Responses to “Tracy McGrady Is Upset With Chinese Media, Intends On Staying Retired From Basketball”