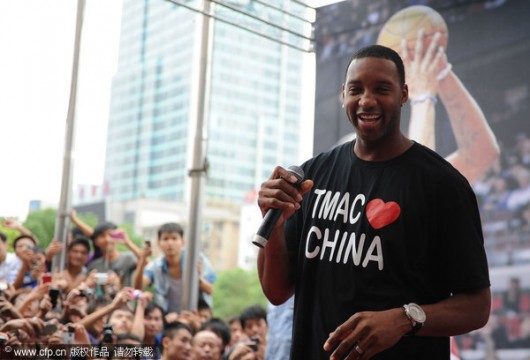 Six months ago, seven-time NBA all-star Tracy McGrady shocked the basketball world when he signed a one-year contract with the Qingdao Double Star Eagles of the Chinese Basketball Association (CBA).

With Stephon Marbury already setting the standard as the ultimate CBA success story, McGrady was expected to further raise the profile of the top league in the world’s largest basketball market. He was already a fan favorite: during Yao Ming’s tenure with the NBA’s Houston Rockets, Chinese basketball fans embraced T-Mac, then a perennial All-Star.

But the season didn’t turn out as planned. The Double Star Eagles stumbled out of the gates and limped their way to a CBA-worst 8-32 record, with McGrady encountering hardship on and off the court and making international headlines on a monthly basis.

He played his final game this week, a 17-point loss to the CBA’s best team, the Guangdong Southern Tigers. On this occasion, we look back at the major happenings during his first — and hopefully not last — stint in China.

Oct. 2, 2012 – The Rumor: 361 Sport reports that two-time NBA scoring champion Tracy McGrady and his representatives are in discussions with the Qingdao Double Star Eagles. Sources indicate the 33-year-old was also working out with two NBA teams, the Knicks and Spurs, and wasn’t ready to retire from basketball.

He writes: “As I enter this next chapter, I am excited to play for Qingdao Eagles in China. I have been to China several times in the last few years and I love the people and the country. It will be an honor to play for them.”

The contract is reportedly a one-year, $1 million deal.

Oct. 24, 2012 – Now Landing, Flight T.M.A.C.: After a long flight, McGrady lands in Qingdao airport to a welcoming 2,000-plus fans. Video of T-Mac wearing a blue hoodie with tinted sunglasses being escorted through the airport goes viral across the basketball world.

His arrival to China is life-changing for some. China Daily reports:

His appearance drew hundreds of flashing cameras and loud shouts of his nickname, “T-Mac”, from the fans.

“I started to admire him as early as 2001. When I heard he would play in China I told myself that no matter which city he played in, I would move there,” said Xu Guobin, 30, a salesman who works in Qingdao, while holding a poster of McGrady newspaper reports.

“When I heard he was going to play in Qingdao I was overjoyed. There are so many fans here. I just saw his waving hand, but that was enough for me to be in tears now.”

Oct. 25, 2012 – It’s Gotta Be The Shoes: During McGrady’s first practice in China, he wears a pair of shoes with a thick layer of white tape over the logo. The shoes appear to be a gift from the club. McGrady was hiding the logo to prevent conflicts with his sponsors.

After his first practice, CCTV reports, “The 33-year-old was obviously not in his best physical condition yet, as a missed dunk and awkward smile suggested.”

Nov. 22, 2012 – Preseason: McGrady’s first real sight of basketball with Chinese characteristics comes when his team takes on an international all-star team in a preseason game in Shandong province. After playing the first two minutes, McGrady takes a seat and doesn’t return to the court. Fans are outraged, and at the end they begin launching bottles, cups and lighters onto the floor in protest.

McGrady would take matter into his own hands. He grabs a microphone, walks to mid-court, apologizes to the fans and thanks them for their support.

Nov. 25, 2012 – McGrady’s Debut: The stars were aligning in McGrady’s season debut. With the shot clock turned off and the game tied at 92, McGrady has the ball in his hand with a defender guarding him at arm’s length. He dribbles once to his right, then goes to switch hands. But to his surprise, the quick defender strips him of the ball and calls timeout.

Nov. 29, 2012 – You’re Fired: After losing their first two games of the season, the Double Star Eagles part ways with head coach Kang Jung-Soo. The season before, Kang led the team to a franchise-best 16-16 record. He also served as an assistant coach on the Korean national team.

Mbenga struggled in his role as the key pick-and-roll man in the McGrady offense. He averaged 11 points and five rebounds at the time of Kang’s firing. He is replaced with undrafted center Chris Daniels, who has some NBA D-League experience.

Dec. 7, 2012 – Diarrhea: It’s safe to say this might have been McGrady’s most physically uncomfortable CBA game. Hosting Liaoning, a circuit malfunction cut off all heat in the Qingdao arena prior to tip-off. A basketball arena can get pretty cold in mid-December. On top of that, with 2:37 left in the first quarter, McGrady sprints off the court to the dressing room, leaving fans dumbstruck. A Double Eagles officials says after the game, “His stomach wasn’t feeling very well, no biggie.”

Jan. 9, 2013 – Three Blind Mice: “The CBA has to do a better job with these officials. My team plays hard every night and the 3 blind mice take it away from us!” That from an angry McGrady on his Sina Weibo account, venting his frustration after a loss to Bayi.

“This bad officiating has to change. No way I’m coming back if the officiating continues to be this errant,” he writes.

The CBA responds by handing McGrady a one-game suspension and fining him $1,600.

Jan. 15, 2013 – The $5,000 Interview: McGrady and company ride a four-game winning streak after T-Mac’s excellent individual performance vs. Jilin. But it’s revealed via a Jilin newspaper that he requires an upfront payment of $5,000 for one-on-one interviews.

Feb. 2, 2013 – McGrady the All-Star: CBA All-Star starters are decided by fans in online voting. McGrady leads everyone with 2,218,388 votes, more than 600,000 better than the second-highest vote-getter, Yi Jianlian. The CBA holds its all-star game between the end of the regular season and the start of the playoffs.

And then, on Sina Weibo, McGrady announces that he will not be participating in the All-Star game because he needs to return home to be with his ailing grandmother.

His final words: “I loved playing for this great country and the amazing people of China. You are gracious, loving, passionate and supportive fans. You have all made me feel at home here and for that I am forever grateful. From my heart, I thank you for all your love and hope to see you all again soon.”

Nick blogs at The Basketball Buddha.