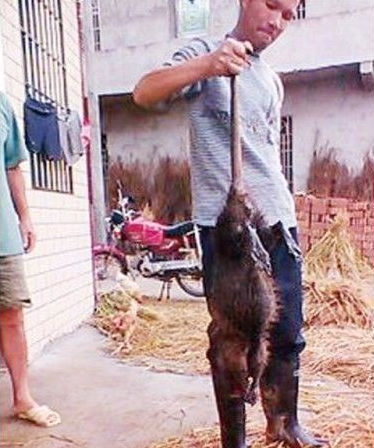 The Hunan-based Sanxiang Metropolis Daily brings us this picture of a 5.1-kilogram, 90-centimeter-long (nearly a meter!) rat that you just might be seeing in your nightmares.

On the afternoon of September 25, villagers in Shaoyang, Hunan province found this beast diving for fish in a pond. Villagers reportedly had been on the lookout because they were routinely losing fish and didn’t know why.

They saw two ginormous rats and managed to capture and at least the one above.

Some villagers have reportedly speculated that this freakish creature — “Godzilla rat,” as Want China Times puts it – may have been introduced from elsewhere (America was specifically cited, though who knows).

Is Godzilla rat more or less frightening than killer hornets the size of adult human palms? You decide!