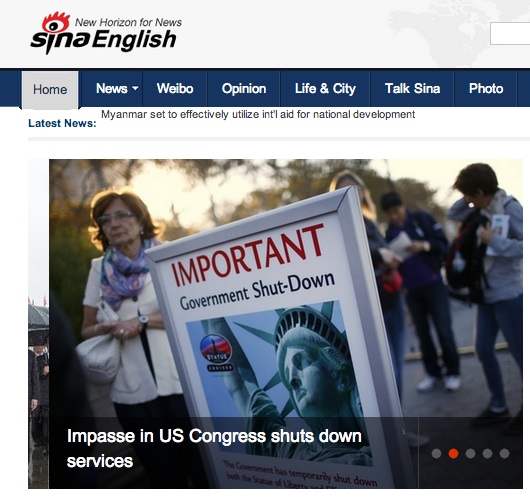 The US government shut down on Tuesday as Congress failed to pass the necessary bills to keep it operational — “it” being the government. If you want a quick-and-infuriating primer on the situation, CNN has you covered, as does Washington Post, and James Fallows offers wise analysis as always over at his blog.

But what does China think?

The Atlantic points out that China Daily and Global Times are surprisingly late with editorials. “But the shutdown still registered as a trending topic on Sina Weibo, China’s most important social network, where most of the comments displayed a mixture of shock, derision, and glee, with no small amount wondering how the world’s most powerful country got itself into this predicament.” Also:

More importantly, stock markets across Asia have taken the news in stride – and the Chinese index is even up 0.7 percent.

But Tea Leaf Nation makes a slightly different observation: China’s official commentators have remained subdued — the tone “has been explanatory, not celebratory” — and the reason is clear: because the Chinese government hasn’t exactly earned the right to call anyone out, as netizens are pointing out.

In Chinese social media, meanwhile, the government shutdown became an opportunity to criticize the Chinese government. Chatter ran deep: the Chinese equivalent of “#USGovernmentShutdown” rose to the second-most discussed topic on all of Sina Weibo, a popular social media platform, as of this writing. Weibo users have commented on the topic more than 135,000 times.

…Some veiled their critiques. Xu Jilin, a professor of history at East China Normal University in Shanghai, wrote, “The government has shut down, but the country is not in disorder — now that’s what you call a good country where people can live without worry.”

The gridlock itself, decried by most commentators in the U.S., struck many Chinese as a sign of lawfulness. As one user remarked, “A government that can shut down, no matter how big the impact on everyone’s lives, is a good thing. It shows that power can be checked, and the government can’t spend money however it wants.”

But are these reactions — as also covered by Offbeat China — really all that unusual or surprising? Sina Weibo’s the place where netizens constantly criticize the government. Yet their pervasive cynicism girds a better — an optimist might say hopeful — desire for China’s government to be better. To strive toward progress, as it always has. To strive. Progress. Work. Have we made the point clear yet? Grind away. Chop wood. Keep governing. As if it were their job.

5 Responses to “Chinese Reactions To The American Government’s Shutdown”