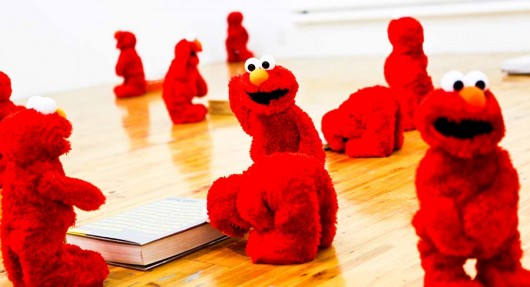 Our friends at Beijing Today will be swinging by every now and then to introduce art and culture around the city. This week’s focus is on 798′s Galleria Continua Beijing, which currently is featuring a solo exhibition by Qiu Zhijie. This post is reprinted with permission.

Born in Zhangzhou, Fujian province in 1969, Qiu graduated from the printmaking department of the China Academy of Art in 1992 to become one of the nation’s most active conceptual artists.

His work spans many media, from printmaking to video, photography, performance, sculpture and painting.

Although he wears many hats – artist, curator, writer, professor and scholar – Qiu has been amazingly prolific. Most of his exhibitions present striking themes and new material.

This constant innovation has made Qiu an intellectual powerhouse in the world of contemporary Chinese art. Most of his works are heavily involved in historical, social and academic issues, outlining Eastern and Western culture of the past and present.

Satire, his latest exhibition, was inspired by The Name of the Rose, a book by Italian philosopher Umberto Eco.

The story explores a chain of murders in a monastery. While first attributed to evil spirits, an investigation proves they are connected to the legendary second volume of Aristotle’s “On Poetics,” the only copy of which is in the monastery’s library.

Aristotle talks about tragedy in the first volume and how laugher can bring pleasure to the world in the second. The idea was unbearable for a medieval world under theocratic rule – especially at a time when the church believed laughter would subvert order and the authority.

The exhibition is Qiu’s version of the lost book, with each “chapter” showcasing one of his pieces related to laughter.

The entrance has 80 masks painted with colorful faces that visitors can wear. The assortment was inspired by traditional masks worn in Chinese festivals in ancient times. Qiu said the masks would allow viewers to become part of the exhibition.

In the main hall is an installation with 30 laughing Buddhas carved on bamboo roots. Together they support large crossties: a contrast between industrial and political oppression and the laughing Buddha of Chinese culture.

The second floor has 50 laughing Elmo toys scattered about the floor beside serious books such as The Bible and Theories of Marxism.

The exhibition also included a performance piece on opening day, as well as an ongoing display of photos and videos.