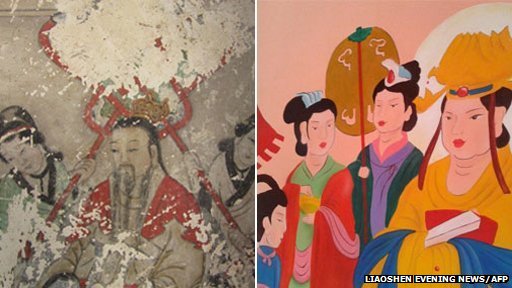 Those who don’t know history are doomed to destroy it. In Chaoyang, Liaoning province, two officials have been fired for embarking on a “restoration” project that painted over centuries-old Buddhist frescos with bright and gaudy blues, yellows, and reds, resulting in tawdry Taoist figures who belong on a coloring book cover.

The best part about this story is that the unauthorized restoration was reportedly exposed by a microblogger. No rumor-mongering here: shit is shit, even dressed up in pink clouds: 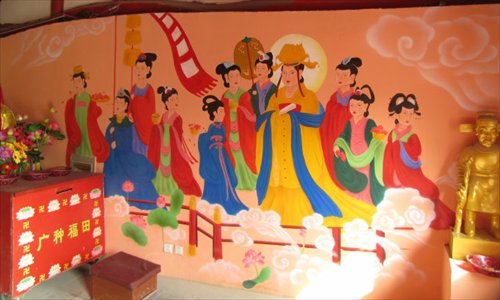 Global Times has this story:

The Party chief of the Phoenix Mountain scenic area management office was given a warning, and the official in charge of temple affairs, together with the head of the city’s cultural heritage monitoring team, were sacked, said Li Haifeng, the Chaoyang government deputy secretary-general.

A Net user, nicknamed Wujiaofeng, recently published a series of photos showing the new paintings at a hall in the Yunjie Temple in the scenic area, and compared it with the old frescos, and criticized the restoration project for destroying cultural relics.

Here’s a look at what the old frescos looked like: 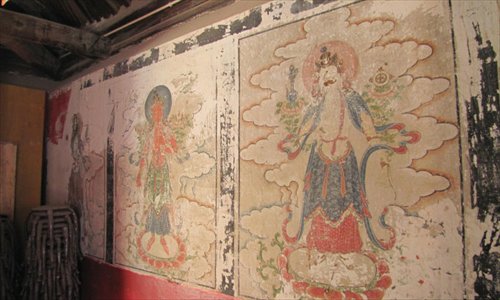 According to GT, “Experts from the provincial cultural heritage government said the frescos can be restored to the way they looked in the past, but of course, would not be the originals.” Of course. They would wear the stain of modern-day paint and poor judgment.