Taiwan’s basketball team has done it again. For the second time in two months, it erased a double-digit second half deficit en route to an upset of China.

The latest win happened, incredibly, in Tianjin, essentially a home game for China. With the 82-79 victory on Monday, Taiwan (Chinese Taipei, as they’re officially called) takes home gold at the East Asian Games.

Point guard Ke Chi-hao gave Taiwan a two-point lead on a three-pointer with 25.7 seconds left, and after China’s Zhai Xiaochuan failed to convert a three-pointer of his own as time wound down, Tseng Wen-ting converted one of two free throws to seal the victory.

…Taiwan earned the gold after China dominated most of the game. It led 40-33 at halftime and was ahead by as many as 13 in the third quarter, before Taiwan fought back.

Taiwan’s previous victory over its “big brother” came in the quarterfinals of the FIBA Asia Championship in August, when it turned a 10-point halftime deficit into an 18-point blowout. We said at the time that the loss was “humbling” for Team China.

We’re not quite sure what to call this latest setback. Discouraging, possibly. Or… expected? The lean years of Chinese basketball have officially begun, during which it’ll need to overhaul a roster of aging national team veterans who barely look the part of rec league competitors (Wang Zhizhi, sorry — thinking of you).

Chinese Taipei, meanwhile, is a young, fun, and exciting team, having just secured its first East Asian Games basketball championship since 2005 (it also won in 1997). Next time they prevail over their rivals from the mainland, a team they had never beaten in a major international competition before this summer, perhaps no one will be very surprised. 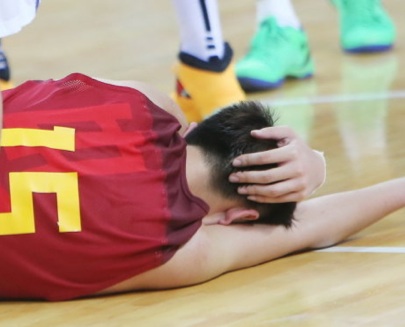