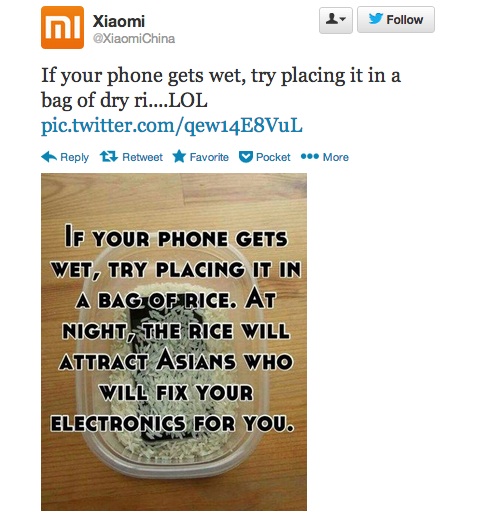 Recently tabbed in a Time headline as “China’s threat to Apple and Samsung,” you probably know this company, founded in 2010, for its Mi3 handset, which sells for a slim $327 despite a bunch of neat features. Or perhaps you’ve heard its founder, Lei Jun, being compared to Steve Jobs — a comparison that Lei, to his credit, has rejected.

Perhaps you should think about doing so.

Between dishing company news and engaging users, the people behind @XiaomiChina appear to have a healthy sense of humor and a fondness for memes and cats:

The hardest thing to see is what is in front of your eyes. —— 眼前的往往是最容易被忽略的。 pic.twitter.com/Om5GkJaXPc

There are inklings of not giving a shit, but not in a way that’s offensive or irresponsible, which is neat to see from an ascending tech company that aspires for greatness but probably hopes to retain its underdog spirit. For now, they don’t even seem to mind posting memes that are ostensibly favorable to their competitors, such as the iPhone:

And pictures of Xi Jinping acting blase in the face of a Xiaomi CEO presentation? It takes self-confidence to post this:

Did we mention memes?

The feed — curious, to say the least; entertaining, for sure — has prompted tech beat writer Eric Jou of China Daily / Kotaku to tweet at Xiaomi with the question, “Is your Twitter feed for real?”

We hope so. The best guerilla marketer out there today remains Chinese condom manufacturer Durex, whose PR team deserves a raise (for this stunt, if not this one), but here’s to hoping that Xiaomi can give them a run for their money.

If nothing else, follow these guys for the potential flame war with Android. Make it happen, please.

Some people just act like they are trying to help you. You have to think out of the box. pic.twitter.com/hwXZG2JWPd