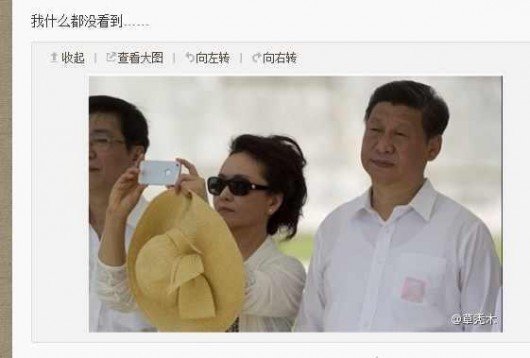 Those wonderful viral marketers at Durex — who were responsible for this ad that implied Barack Obama has a bigger penis than Mitt Romney — sprinkled some photoshop magic to one particular photo of Xi Jinping and Peng Liyuan that’s been making the rounds.

In the original – somewhat lampooned because China’s First Lady is using an iPhone – Xi Jinping definitely does not have a condom in his breast pocket. Eric Jou, the Kotaku correspondent in Beijing who recently joined Twitter, captured the above screenshot before censors nuked it off Sina Weibo.

On the one hand, we’re playing right into the (probably cruddy, gummed) hands of Durex’s marketing department by reposting this. On the other, we do hate censorship, so… here it is. Shanghaiist has it too.

By the way, censors don’t want you searching for “Peng Liyuan iPhone,” either. Goddamn censors.