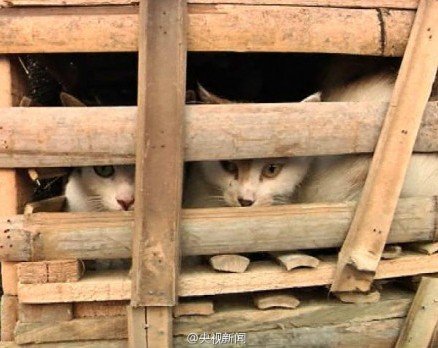 Animal activists are combing a forest in eastern China for more than 1,000 kittens rescued from a meat supplier only to be let loose by local authorities, an organiser said Monday.

That’s the lede. What it tells us is that, apparently, people eat kittens (if you believe everything you hear in the news). It also tells us that in some cases, local authorities, who don’t want to raise 1,000 kittens (and why would they deny themselves that bit of heaven???), will let all of them loose in the forest.

This is reportedly what happened in Wuxi, Jiangsu province last week.

But local government officials released the felines — some as young as four months old — into a nearby mountain forest to fend for themselves, Ni said.

“They were being sent to Guangzhou to be eaten by people,” he told AFP.

“We didn’t want to release them, our volunteers had places to keep them. It’s definitely irresponsible.”

The story really doesn’t get better from here. Fifty or so kittens have been rescued, but some have been run over by cars, etc.

It’s an unforgiving world we live in. If only more people grew up with copious cat gifs.

3 Responses to “1,000 Cats Destined For Slaughter Rescued, Then Released Into Forest”