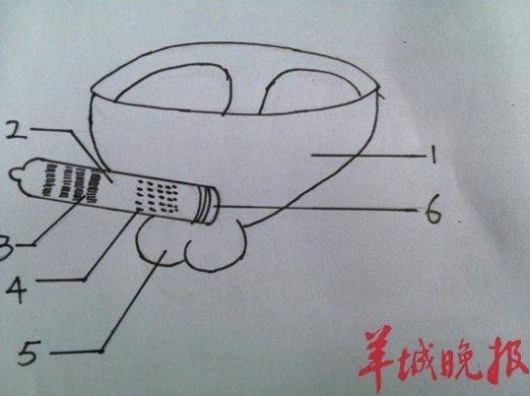 Sex, G-string, condom are all embarrassing words for most Chinese, but for 20-year-old university student Kong Yan from the Guangzhou-based South Medical University, those are the things she talks about every day, Yangcheng Evening News reported.

The third-year student, who thinks today’s condoms don’t properly protect against all venereal diseases, established a team with four other girls and one guy called “Orient Rise-up” to make a super big condom.

After several months of research, the team invented a detachable G-string condom called “Guardian of Love.” (Prototype stage only.) It can prevent larger parts of the body from contacting that of the partner. Also, it’s multifunctional: a G-string and condom all in one, plus sacs for the testicles.

Instead of oily lubricants, the love guardian is lubricated with something that smells of Chinese herbs.

The ambitious students are now applying for patents, registering as a company, and attracting investors.

A sexual disease expert informed them the product, as is, may only be suitable for sex workers.

G-String? No, it is a multifunctional condom invented by Guangzhou students (Hug China)

2 Responses to “Guangzhou Students Have Invented A Multifunctional, Extra-Large Condom”