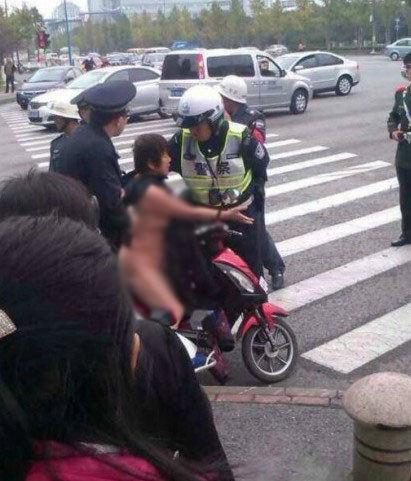 A middle aged woman stripped herself nude and tore at male cop’s trousers when fined for riding her scooter in the wrong direction in Shanghai.

Sorry, I’ve been drinking too much. Explain slowly for me please: why would anyone ride their scooter in the wrong direction?

The woman was caught riding her scooter in the wrong direction at an intersection along the Waiqingsong Road in Shanghai’s Qingpu district.

A police intercepted, criticized and educated her, then when the police asked for a fine of 50 yuan, the woman did not cooperate and refused to pay the fine, but the police retained her scooter and did not let her go.

It gets better or worse from there. Depending on your definition of better/worse and from whose perspective you’re analyzing the situation.

One Response to “Naked Woman Rides Scooter Against Traffic In Shanghai”