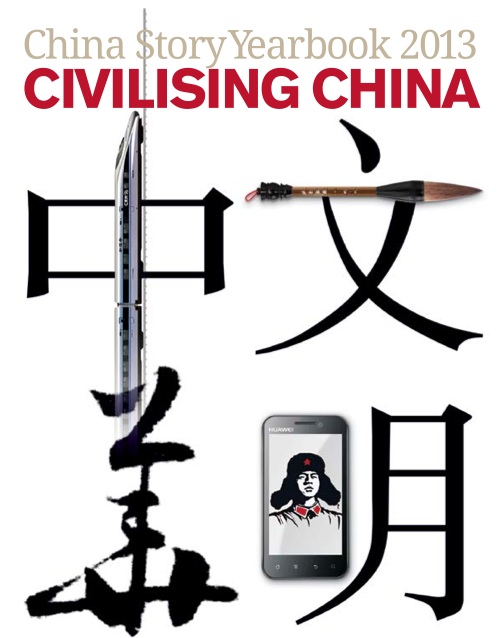 Last Thursday saw the publication of the China Story Yearbook 2013, the second in an annual series published by the China experts at Australia National University’s Center on China in the World. It was co-edited by the estimable Geremie Barmé and Beijing’s very own Jeremy Goldkorn. Disclosure: I’m partial. I occasionally write for the China Story blog, but don’t let that deter you. The yearbook is packed with insight and perspectives you won’t find in commercial media, with gems that will prove invaluable to any China watcher.

This year’s publication is called Civilising China, and takes as its focus the concept of wenming, which encompasses both grand ideas as civilization and the more everyday notion of civility. This wenming is precisely the one you see plastered around Beijing in connection with anti-spitting campaigns or, as I saw in a park toilet a few years ago, correct urinal usage: “One small step closer to the urinal, one big step for civilization/civility.”

The yearbook includes eight “forums,” in which authors from the Centre on China in the World and other journalists and commentators, such as Leta Hong Fincher, discuss topics including censorship, the rule of law, and the meaning of the “Chinese Dream.”

The expertise is apparent. Barmé, rather characteristically, provides readers with golden nuggets as the origins of “I was here” graffiti vis-à-vis Ding Jinhao:

In the classical novel Journey to the West (Xiyou ji 西游记), the Buddha fools the Monkey King (Sun Wukong 孙悟空) by promising that if he can manage to leap out of the Buddha’s palm, he can occupy the Celestial Throne. The overconfident Monkey King accepts the challenge, jumps into the Buddha’s palm and then does an almighty somersault, tumbling through the air for thousands of miles. Finally, coming to rest at a place where five massive pillars reach into the sky, the Monkey King promptly scratches the following characters into the middle pillar to prove he was there:

Throughout, the China Story Yearbook places news and current events in the context of thousands of years of Chinese history. Another great example is that the phrase “four dishes and one soup” — used by Xi Jinping in his call for frugality among Party members — which has its origins in the rhetoric of Ming campaigns against officials’ gluttony.

Such historical contextualizing reflects the China Story’s mission — in large part a response to the CCP’s desire to monopolize the narrative of Chinese history — to tell a diverse, plural story of China and the broader Chinese world. The entire site is a gem — hidden, by some accounts — for us sinophiles. In particular, there’s a fantastic section on Chinese intellectuals, old and contemporary, and a section called Lexicon A-Z, a dictionary of key terms such as “New China Newspeak” and “New Sinology.”

In short, download a copy of the China Story Yearbook 2013 and get reading. A year’s worth of stories will appear in a new and fascinating light.

Tom Baxter is a Beijing-based freelancer writer. He is also co-founder and editor of Concrete Flux, an online journal on urban spaces and the experience of urbanity in China. You can follow him @TomBaxter17.

One Response to “Recommended Reading: The China Story Yearbook 2013”