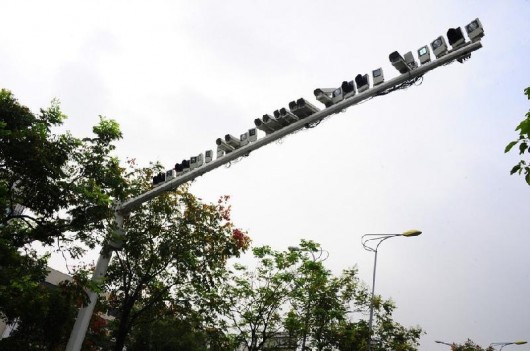 Here’s an intersection in Shanghai with 60 surveillance cameras. What do you think they’re on the lookout for?

Hug China has this:

Authorities in Shanghai’s Baoshan District have installed more than 60 surveillance cameras on one four-lane section of Youyi Road, according to a NetEase report.

The apparently excessive surveillance cameras that were densely crowded on one overhead bar have confused many drivers and shortly after one curious driver took a group of pictures of them and posted online, the pictures have drawn major media coverage.

Locals told reporters that in April, the poles only had 24 cameras attached, in the last few months authorities added an extra 36.

Just so that’s clear: there use to be 24 cameras, but authorities have since added 36. Sadly — is that the right word? — most of the cameras have been removed since the unwanted media attention.

Still, don’t ever commit a traffic violation on that road. Big Brother is apparently a diptera with compound eyes.

One Response to “That’s A Lot Of Surveillance Cameras”