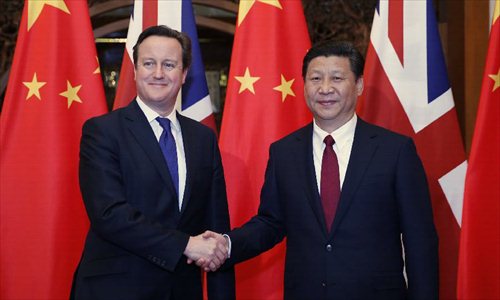 UK Prime Minister David Cameron arrived in Beijing yesterday to boost China-UK relations — to “appease” Beijing, as Western media types would put it — and to back a new EU-China free trade agreement. A few days before, on November 29, Cameron opened a Sina Weibo account, with the first message reading: “Hello my friends in China. I’m pleased to have joined Weibo and look forward to visiting China very soon.” That’s some high-level international diplomacy there. We’re all sufficiently impressed, yes?

Perhaps there is no need to talk about “sincerity” in terms of Sino-British relations. What Cameron does is out of his own political interest and the UK’s national interest. His visit this time can hardly be the end of the conflict between China and the UK.

Wha–? Where is this coming from, Global Times? The above, if you haven’t figured it out, is via a Global Times editorial published today. Can we throw in a veiled threat, GT?

Beijing needs to speed up the pace of turning its strength into diplomatic resources and make London pay the price for when it intrudes into the interests of China.

So the UK will definitely intrude into the interest of China? That’s Beijing’s assumption? What are we talking about here?

China has gained some achievement in countering European leaders’ moves of meeting with the Dalai Lama.

Right. The Dalai fucking Lama. That guy. China comes out of this episode looking comically immature. Never mind that, yes, the Dalai Lama is plainly a political figure who probably doesn’t deserve the attention he gets; the important point is, what does China think it achieves by bullying first-world leaders into not meeting him?

Is the Dalai Lama going to ask for weapons or a blackhawk? The article goes on to address Hong Kong, Global Times continues to be GT until the end:

China has believed in “diplomacy is no small matter,” while after years of ups and downs, we have acquired the strategic confidence that “diplomacy is no big matter.” China will act accordingly given how it is treated.

p.s. Where is David Cameron now?

After a day in Beijing I'm heading off to Shanghai #UKinChina pic.twitter.com/o36dMepTHa

6 Responses to “David Cameron Is In China, On Sina Weibo, And Hated By Global Times”