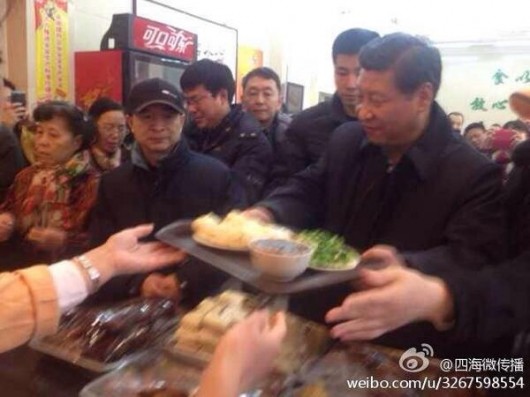 This certainly looks like Xi Jinping in a crowded Beijing restaurant. Weibo user @四海微传播 wrote at 1:20 pm today: “People, I’m not seeing this wrong, am I? Uncle Xi came to Qingfeng to eat steamed buns (baozi)!” The same user messaged again at 1:34 pm: “Uncle Xi queued to buy steamed buns, even paid his own bill, carried his tray, chose his own buns.”

The message was forwarded by none other than the official Xinhua Sina Weibo account at 1:38 pm.

Is this a set-up, in the same way that so many of these public-figure-deigns-to-walk-among-commoners episodes are? That is to say, was it pre-planned, with (undercover?) photographers lined up, with a clear motive? (At this point, we’re inclined to believe that really is Xi Jinping, not an impersonator — if state media is retweeting instead of actively censoring the story. This isn’t a repeat of the taxi incident in April, when Xinhua verified — then retracted — an always-apocryphal Xi-Jinping-took-a-taxi-by-himself story.)

If this isn’t a set-up — if Xi really did just pull a Gary-Locke-at-Starbucks — we have a lot more questions. What restaurant is he visiting? (UPDATE: Here’s the website for the restaurant referenced in the weibo, Qing-Feng Steamed Dumpling Shop, located at Xinjiekou.) Did he grow nostalgic for steamed buns — if so, what kind? — or are Zhongnanhai’s chefs just that poor? Did he really wait in line? For how long?

Below are two more pictures, via Sohu. Surely more will become available on the Internet, if those camera phones are any indication. Then again, we wonder how many of those plainclothes folks are from Xi’s entourage. (The tall dude in the center, surely.) 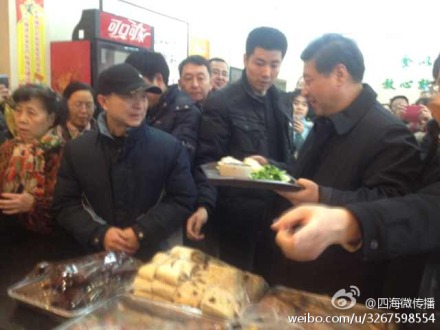 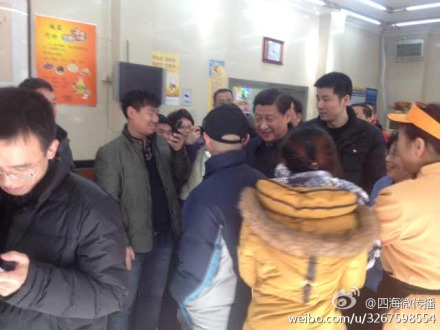 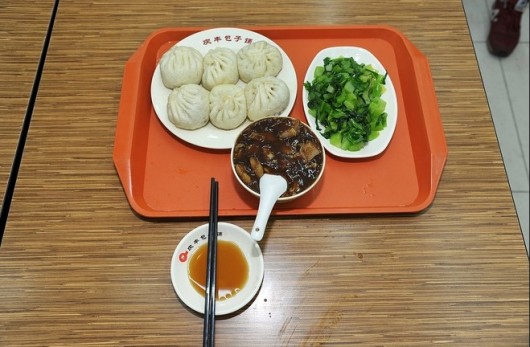 One Response to “Is This Xi Jinping In Line In A Beijing Bun Shop?”