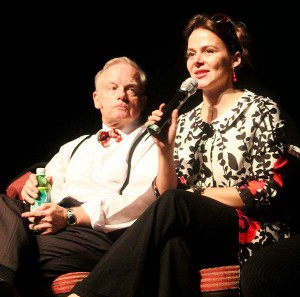 Many foreign students come to China each year, but few are like Alison Friedman.

After studying, working and living in Beijing for a decade, Friedman decided to remain in China to establish Ping Pong Productions (PPP), a company devoted to “bringing China and the world together through the performing arts.”

“The great value of art is its ability to show diversity,” Friedman said. When people talk about American culture, they think of McDonald’s, Starbucks, Apple, Hollywood and Disney. “Performances can reveal other aspects of American history and society.”

For instance, a recent docudrama that the company toured, Top Secret: The Battle for the Pentagon Papers, examines American involvement in Vietnam.

The drama, first presented in China in 2011 in cooperation with L.A. Theater Works, tells the story of The Washington Post’s decision to publish the Pentagon Papers. It was an important moment in US history, and the subsequent trial pitted the public’s right to know against the government’s need for secrecy.

Cultural exchange is a two-way street, and Friedman is engaged in similar projects abroad.

While many foreigners’ understanding of Chinese culture is as shallow as Peking Opera and acrobatics, Friedman aims to show the country’s contemporary works abroad and build an international audience for Chinese creatives. Part of that is giving young Chinese artists the opportunity to perform in leading world theaters.

One of PPP’s main projects is TAO Dance Theater, which it has sent abroad to places like Lincoln Center Festival (US), Sydney Opera House (Australia) and Sadler’s Wells (UK).

Treating dance as a visual medium devoid of narrative, Tao expands the body’s limitations and surprises the audience.

CVNC Online Arts Journal North Carolina said TAO Dance Theater “confounds and amazes. It is rare to be able to say, ‘I’ve never seen anything quite like it,’ and really mean it.”

“Tao is very creative and we recognized a like-mindedness in each other during our early conversations at BMDC,” Friedman said. Both share the same ideas about dance and art.

PPP helped TAO Dance Theater book performances in nine cities this year. It has another 11 scheduled for 2014.

Another Chinese artist with which PPP is working is Wang Chong, the artistic director of Beijing-based performance group Theatre du Reve Experimental.

“Wang has a very clear voice and direction that he’s developing,” Friedman said.

Founded in 2010, PPP has  grown to employ four full-time staff and three part-timers this year. Friedman has to fly to different cities – sometimes different countries – for work at least once a month.

The most difficult part of starting her own company was the beginning: “to build something out of nothing,” she said.

In the last 12 years, Friedman prepared as much as she could: she became fluent in Chinese, applied for the Fulbright scholarship to study contemporary performing arts, built media experience at China Radio International and networked with leading artists, art companies and musicians like Tan Dun.

In 2009, she went to Washington DC for a nine-month fellowship in art management at the John F. Kennedy Center for the Performing Arts.

“I started the company as something project-based,” Friedman said. At the beginning, she did not have an office or hire any full-time employees. That humble beginning has laid a solid foundation for growth.