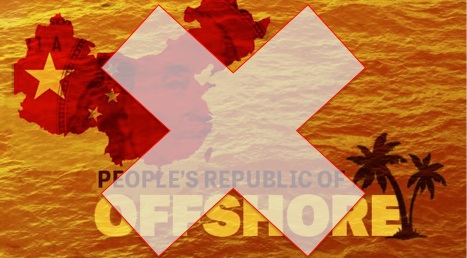 Unfortunately for the Chinese Communist Party, this story just isn’t going away. What has been a constant spectre mocking the Party’s exhortations that they are clamping down on corruption and “ill-gotten gains” has been the investigations into the immense wealth accumulated by the Chinese elite and their relatives. Yesterday, more revelations came out which revealed how the relatives of China’s top officials have utilised offshore tax havens – the British Virgin Islands are the favourite “holiday” destination – in an attempt to shield their accumulation of wealth.

What of recriminations, of visa denials, or journalistic intimidation? The New York Times and Bloomberg don’t have their fingerprints on this one. This story was broken by the International Consortium of Investigative Journalists – I hadn’t heard of them either – and their findings included the immense assets – primarily, listed companies and consultancies – controlled and owned by the “red nobility” of relatives of the Politburo Standing Committee. Given that the NY Times and Bloomberg had probably pushed their hand as far as possible, it was time for someone else to wade through the swathes of paperwork that masked the entrepreneurial achievements of these genetically blessed cadres.

Predictably, the International Consortium of Investigative Journalists is now blocked in China. If you’re the cheeky kind though, you’d do well to pass this amongst your politically and socially aware friends:

Unblockable link to the @ICIJorg report in Chinese about the wealth of China’s elite https://t.co/wWBk63G3PI pls RT

There’s certainly a lesson here in breaking news stories that will receive the ire of the Party:

1. Best to break them in January, right after receiving one’s visa renewal – which typically occurs in either November or December. You’ll have the better part of a year to plan for the non-renewal.

2. The experience of The New Citizens Movement indicates that while “illegal assembly,” “gathering crowds to disturb public order” and “using a cult to undermine implementation of the law” are big no-nos, consortiums haven’t caught the ire of the authorities… yet.

Eventually, in the evolution of Western reporting on the accumulation of elite affluence, paparazzi will sift through Chinese dumpsters – “Look where he’s been shopping!” — to find the dirt, but right now, they don’t need to. If Party officials were so keen on clamping down on graft and corruption, maybe they should first try harder to hide their own.