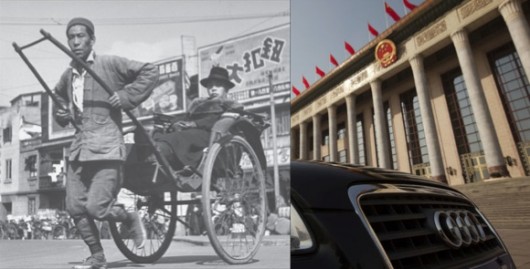 A jet-black Audi A6 with government plates rolls down the streets of Beijing and stops at a school, mall or restaurant. Out steps a teenage girl, backpack in tow, who surely can’t be a government official — but just might be the daughter of one. Secretly, every pedestrian scoffs and/or hisses.

If last November’s Communist Party announcement about the procurement and use of government cars actually pans out — eliminating all but a select number (取消一般公车) — familiar scenes like the above may no longer dominate urban Chinese landscapes. Part of the wider move for good governance and eliminating waste, the misuse of government cars (公车私用, gongche siyong) is so damaging to the government because it is so obvious.

It’s tempting to consider gongche siyong a recent problem, since China’s car boom is a phenomenon of only the past thirty years. But the misuse of public vehicles predates the establishment of the People’s Republic of China. Looking into the history of private abuse of public vehicles actually makes recent reform measures seem more significant — and at the same time making it doubtful that a solution exists.

The automobile spread quickly around the world in the 1920s and 1930s, remaking urban landscapes and rhythms of daily life. China was no exception. As The New York Times noted in September 1936, Guomindang officials in Nanjing were “acutely traffic-conscious” because “they face[d] the twin tasks of making the population traffic-wise and of educating the thousands of new chauffeurs in the rules of safe driving.”

Safety, though, was just one problem.

By the mid-1930s, the misuse of government cars drained official resources and threatened the prestige and reputation of the government. According to statistics compiled by the Public Works Bureau of the Nanjing Municipal Government, more than 500 of the nearly 1,500 motor vehicles in the city belonged to the government. The authorities owned 259, 65 trucks, 16 buses, 36 motorcycles, 135 bikes and 45 rickshaws, according to research by Hsieh Kuan-Yi, published in the 1935 paper “The Use of Control of Motor-Cars in Central Government Organs.”1

There were rules for how to use these cars, but they were “grossly neglected in all but a very few government organs.”* Bicycles, for example, were used largely to transport messages while police and health bureaus also used them to carry out routine business as well as inspections. Rickshaws generally served officials venturing out to make purchases and were not used by high-ranking officials.

Cars themselves fell into three categories: specially reserved, office service and general. The heads of all government offices had access to specially reserved cars and this group accounted for more than half the total number of cars in the government’s fleet. Some higher-level bureaucrats had use of office cars for commuting to work. General service cars were for official business errands, but this final service gave “rise to considerable difficulties in matters of distribution and control, due to the limited number of cars.”*

Despite the a number of regulations already on the books, the misuse of official cars for private purposes was relatively easy. In order to get access to a general-use car, an official had to fill out a request form, obtain approval from his superior and send it to the Miscellaneous Affairs Section of whatever government department he happened to work in, which had control over the vehicles.*

In theory, after the journey, the chauffeur had to fill out a detailed report concerning the destination, the route and the length of the journey. This form had to be signed by the official in his role as passenger in the vehicle. In theory, complaints “such as the prevalent one against the use of public motor cars by officials for private purposes should not exist.” But, as anyone could see, the “display of Government cars in front of cinemas and restaurants and speeding along highways and at scenic places on Sunday’s are sufficient testimony to the prevalence of such abuse.”* That sounds familiar.

Chauffeur salary and behavior were also problems. According to estimates, it cost $150 to maintain a government car for one month: $90 for gas, $45 for driver wages and $15 for repair and miscellaneous expenses.* Perhaps these drivers got paid too much: sometimes more than government officials, and always much more than others employed in the menial but necessary positions that kept a government bureau functioning.

Beyond a high salary and reckless driving, chauffeurs stood at the center of another important abuse: stealing. Theft of gasoline was “an open secret” and had “become a sort of recognized vice… one of the of the chief causes for the high gasoline consumption in various organs.” Each government car consumed on average 100 gallons of gasoline a month, with 50 gallons considered quite frugal and 200 viewed as wasteful. Since drivers were charged with requisitioning supplies for their cars, they freely asked for supplies from the Miscellaneous Affairs of each bureau and, “owing to laxity of inspection,” the chauffeurs were “very largely uncontrolled.”*

There was one predictable and one surprising proposal to combat the abuse of public vehicles problem in the 1930s. The traditional bureaucratic answer stressed implementing a stronger system of control. These reforms needed to start with better knowledge of cars themselves. The theory was that if the person in charge of administering cars in each bureau actually knew something about cars, it would be easier to spot skullduggery. The ideal system would have been to centralize the purchase, repair and use of automobiles across all layers of government, but there was doubt whether the adoption of such an arrangement in China was “practicable, at least at present.”*

Instead, the best answer was shrinking the government fleet. Horses would work as well as cars — and were also cheaper. Though the initial outlay for each horse and carriage ran between $300 and $400, the maintenance costs would be three to four times less than motor vehicle. The speed of the carriage — “ample for ordinary government business” — made this a solution that “should be considered as a remedy for the wastefulness for the motor service.”*

The solutions proposed in the 1930s and in 2014 — minus the horses! — really aren’t that different. Eliminate gongche siyong by shrinking the government fleet and give bureaucrats fewer opportunities to misuse, then centralize control over the remaining fleet. If the proposed reforms do eliminate or at least significantly lessen the abuse of public vehicles, they will represent a major step toward eliminating a problem that transcends differences between the CCP and KMT: the private use of government property simply because officials think it’s one of the perks of the job.

2 Responses to “From Rickshaws to Audis: China’s Misuse Of Public Vehicles In The 20th Century”