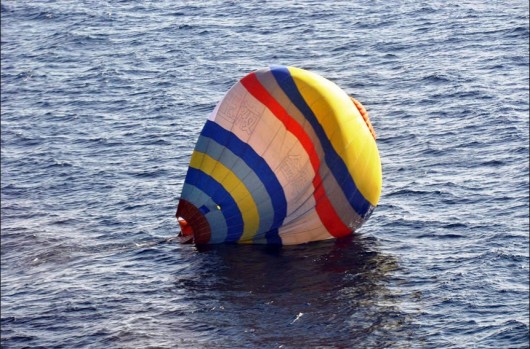 For the proud nationalists of China, Japan and Taiwan, the Diaoyu island chain remains the perfect outlet to exercise one’s willfully blind patriotism. Which is — fortunately for the rest of us — shouting distance from stupidity. Hilarious, utter stupidity.

Intending to circumvent the Japanese patrol boat cordon which has prevented other nationalists from reaching shore, Xu Shuaijun from Hebei province flew a hot air balloon from the mainland to the disputed island chain on Wednesday. Setting off from Fujian province, Xu, an accomplished balloonist, handled with ease the newly overlapping Air Defence Identification Zones and got to within about 20 kilometers of the uninhabited islands before crashing into the sea after suffering a mechanical fault.

After receiving a distress signal, a Japanese Coast Guard vessel picked up Xu before transferring him to a Chinese patrol boat. While it might seem a foolhardy pursuit to travel hundreds of kilometers to an isolated chain of rocks in a vehicle not made of steel, given the heavy presence of patrol vessels in the area, it seems safe enough. Like climbing Mount Everest if a Chinese super mall were perched on the summit and every sherpa had gone through med school.

Chinese foreign ministry spokesman Qin Gang, in a briefing, did not mention the Japanese’s role in the rescue, according to Global Times.

This is great entertainment. Outside of the bland ultimatums, pronouncements and saber-rattling of the politicians involved, everyday civilians are making a fantastic contribution to keeping the tinder dry in this very surreal dispute. A dispute over territory, when that territory is uninhabited, isolated, and surrounded by water, portends that the ideal location for the picket line – usually a brick’s throw from the front of an embassy – is the goddamn territory itself! Attempts to reach this idyllic picket have morphed into a farcical competition that resembles a university scavenger hunt; ah, if only Kashmir was this fun.

How can the Japanese top a balloon? Nothing short of the launch of paragliders in Flying V formation will suffice; anyway, the Chinese owe them a rescue.

Lincoln Daw is a freelance writer and stand-up comedian in Melbourne. Follow him @linkydaw.

2 Responses to “That Marooned Balloon”