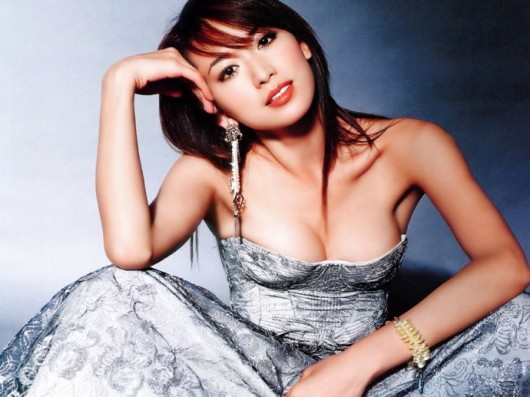 The mayor of Taizhou, a small city in Jiangsu province, has rejected a netizen’s complaint that his mental health has been damaged by an eye-catching outdoor advert featuring the cleavage of Taiwanese model Lin Chi-ling.

The netizen left his message on the government website of Taizhou city on January 10, signing it “a primary school child.”

Dear Mayor, I am a primary school pupil in Jingjiang city (Jiangjiang city is under jurisdiction of Taizhou). There is a Lin Chi-ling advertisement on the outer wall of Wenfeng Big World of Jingjiang. Every day when I pass by this advert, I can’t help looking into her deep cleavage. And in the evening her picture lingers in my brain and I am often filled the desire to masturbate. I have experienced a sharp decline in academic performance in school and I cannot concentrate to study. Mayor, I ask you to help me and do not let Lin Chi-ling’s advertisement continue to hurt my mental health.

This complaint could have been simply ignored, but the mayor of Jingjiang actually replied on January 14:

Ninhao, pupil netizen, as far as we know, officers of municipal administration for industry and commerce have inspected the spot. The advertisement does not contain content that breaches the seventh clause of the Advertising Law of People’s Republic of China, nor has it been deemed dangerous to the physical and mental health of minors.

Some netizens expressed doubt that a real student actually wrote the complaint, while others echoed the writer in worrying about the increasing vulgarity in China and expressed displeasure at female celebrities wearing skimpy dresses.

In an interview by Qingdao based Bandao Metropolis Daily, Lin appeared surprised to hear the story. She said she was sorry and expected the primary school child not to look at the advertisement anymore. She promised to be more prudent in her future endorsements.

5 Responses to “The Disruptive Bosoms Of Lin Chi-ling, According To “Student””

Leave a Reply to Kaisa