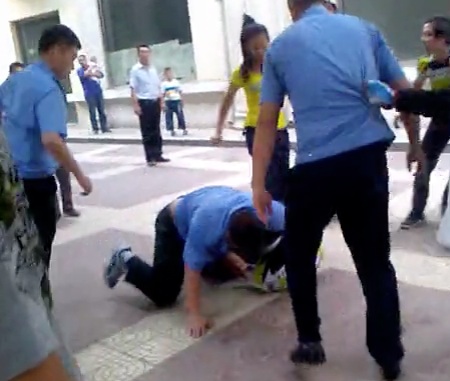 The Global Times recently published an editorial titled, “What if Chinese police beat a jaywalker?” covering the recent case of a Chinese man allegedly beaten by police for resisting arrest after jaywalking in New York. It’s a sad story, and it shows a brutal side of America’s police.

Unfortunately, and I do mean actual non-ironic unfortunately here, the nationalist mouthpiece that is The Global Times is not allowed to write this kind of editorial with this kind of title without sounding completely ridiculous.

However, things might be the other way around if the same incident happened in China. The local police would be charged with abuse of power, and the head of the local police department would have to apologize and the errant police officers could be punished or even sacked.

Tell that to the Chengguan who beat fruit vendor Deng Zhengjia to death.

Tell that to the group of 50 or so Chengguan who attacked an entire village in Lianyugang in Jiangsu Province.

Tell that to the street peddler beaten by police while his nine year old daughter pleads, Stop beating my daddy,” “I’m begging you,” “We’re sorry,” and “You can go ahead and take the stuff.”

Whatever problems America’s police force has, they are nothing compared to the corrupt incompetence that is China’s Chengguan. I wish you could be a force checking America’s internal violence Global Times, but writing from China you just look ridiculous.

4 Responses to “What If American Police Beat Fruit Sellers to Death?”