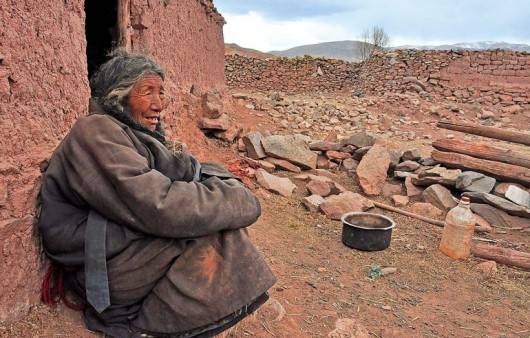 Starting from the age of 10, Jiangnan Yiling, editor-in-chief of Size Outdoor magazine, traveled with his father to snowy mountains, harsh deserts, Buddhist shrines, and the Tibetan steppe. Last month, he spoke at UCCA about his travels and the inspiration for his charity projects.

A visit to an elementary school in Yushu, Qinghai province changed his life in 2009.

“I was traveling for fun that day. We were driving in the mountains when we bumped into this portable school,” he said.

The “school” was little more than a traveling tent that moved around the plateau to offer classes to local children.

“The contrast between developing regions like Guangdong and Jiangsu and truly isolated areas was simply shocking,” Jiangnan said.

The encounter inspired his documentary: a project in which he spent five to 10 years on the road recording village life and documenting living conditions and boosting awareness of poverty.

Jiangnan has visited nearly 50 impoverished regions since 2010, photographing the conditions and learning from the locals.

For the UCCA lecture, he talked about the 10 most touching places he visited.

His personal stories painted a very different picture of China’s development than the one portrayed in official media.

When Jiangnan revisited Yushu after the quake, he learned about the local government’s wild corruption and its plan to use the disaster to grab more land. He recorded the terrible conditions of the migrants and the struggles of the rescue team, many of whom fell ill due to altitude sickness.

His personal account is raw and unedited, written based on his first impressions rather than digested and refined.

Many people who attended the lecture said they were interested in volunteering as teachers.

“Speaking for myself, I do not support the idea of being a short-term volunteer teacher,” he said. “The more you see, the more you become aware that one person’s ability to make a difference is so small and so limited.”

That feeling is partly why he began the project: awareness is the first step in building a system that can provide real support, he said.

The massive turnover in volunteer teachers carries its own burden for the community, much of which consists of children who are left behind with aging, ailing grandparents as their only caretakers.

Jiangnan said he plans to visit all 468 of the government’s officially recognized impoverished counties. Along the way he will record and publish the contact information of children in need.

Although his projects have several sponsors, the majority of his work is entirely self-funded.

To learn more about Jiangnan’s project or his documentary, you can visit his websites at ngophoto.org or bbs.8264.com.