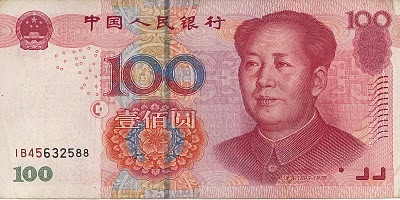 A lot of cash changes hands around Chinese New Year. Despite the convenience of electronic payments, China is still very much a cash-based society, and pink 100-yuan notes featuring the plump visage of Mao Zedong proliferate wallets, pockets, and purses.

Most stories analyzing the Chinese demand for cash focus on the stress it puts on the banking system, but let’s take a look at it from a historical angle: what can we discern about recent Chinese developments by looking at who — and what — appears on the renminbi?

The idea of having national money bound by borders is a fairly recent one. From the 16th century through the first part of the 20th century, a variety of silver coins circulated in China — Spanish and Mexican pieces of eight and even a coin minted by the United States specifically for use in East Asia. Silver ingots and copper coins, generally known as cash, formed a complex monetary system in which exchange rates between copper and silver differed across the country. Importantly, silver coins and ingots were not accepted by count but by weight, how much silver the piece contained, and by fineness, the ratio of silver to other metals. The process of measuring silver ingots for weight and fineness was cumbersome and potentially controversial: if I think I have 20 ounces of silver and you tell me that I only have 19, there is plenty of ground for conflict. 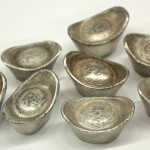 The Ming and Qing governments (before the late 19th century) did not mint silver coins, only copper cash. Different types of silver coins flowed into China through foreign trade. Unlike many European currencies, money during the imperial period, either copper cash or periodic issues of paper notes, did not feature the portrait or profile of the emperor. Coins carried the name of the reign in which they were produced, but the hole in the middle obviously made a portrait of the ruler impractical. Toward the end of the Qing, some provincial governors put their portraits on issues of notes from provincial banks: 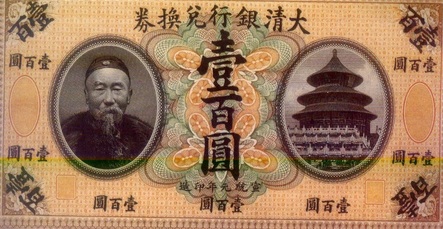 A provincial governor of Qing

At the very end of the dynasty, the regent Zaifeng appeared on notes of the newly established Qing Bank (大清银行): 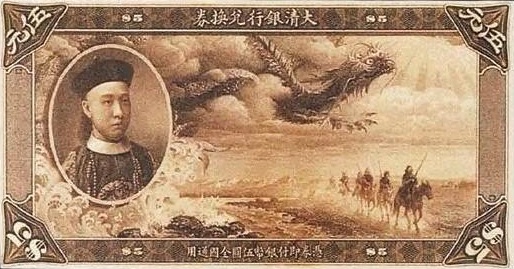 Through the mid-19th century, China’s monetary system was not particularly unique in its complexity. Mexican silver dollars circulated throughout the United States in the first part of the 19th century. Before monetary reform in the Meiji period, Japan, too, had a plethora of coins.

Currency reform was a constant issue from the late Qing through the Republican period. In 1903, the U.S. government sent a professor from Cornell University, Jeremiah Jenks, to convince the Qing to replace silver with a gold standard for their currency. Although Zhang Zhidong and several other late Qing officials rejected this proposal, it began a 30-year debate on the gold standard. Though a silver coin featuring the portrait of Yuan Shikai gained some traction between 1915 and 1925, the political fragmentation of China further complicated the monetary system, with various warlords and provincial officials making their own money. 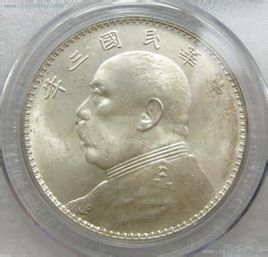 In 1935, the Nationalist government abandoned the use of silver after the United States embarked on a massive silver-buying program to cater to mining interests in western states. As silver drained out of China, the fabi reforms took away the metal’s legal tender quality, giving a monopoly on note issue to four banks. Though some of these banknotes featured the portrait of Sun Yat-sen, he did not dominate them. Though at first fairly successful, the fabi buckled under the pressures of wartime finance as the Nationalist government resorted to printing money to pay for the war. By the end of World War II, fabi notes had depreciated so much that American soldiers used them to light cigarettes.

When the Chinese Communist Party came to power, the currency system, still reeling from rampant inflation, demanded attention. Though ultimately discarding money as a motivator for production is one of the central tenets of the communist creed, there was still a large demand for money to pay wages, even though the state fixed the amount of those wages.

So far there have been five issues of renminbi notes in the PRC. In 1948, the People’s Bank of China (PBOC) introduced a number of banknotes with values ultimately as high as 50,000 yuan. At the beginning of this period the most important task of the PBOC was reigning in rampant inflation. Later issues occurred in 1955, 1962, from 1987 to 1997 and in 1999.

What patterns can we see across the different note issues if we look at who and what appears on Chinese money? The most interesting trend is increasing standardization: Mao Zedong now appears on nearly every denomination of bill. The only types of money that don’t feature his portrait are the one and five jiao notes that carry the profiles of two ethnic minorities.

For the first 30 years of CCP rule, Mao did not have the same monopoly on Chinese money. In fact, Mao does not even make an appearance on the renminbi during the first three note issues. Instead, these bills depict a number of scenes: men and women working in factories, farms, undertaking the important work of building the nation. If there is a theme, it is that of moving forward. Groups march along the road; a young woman drives along in a car. Unlike a portrait that generally looks you in the eye, the figures in these notes cast their gaze to the distance and — presumably — the bright socialist future.

When Mao finally appears on the 100-yuan note in the forth edition of the renminbi, he’s not alone. Profiles of Zhou Enlai, Liu Shaoqi, and Zhu De accompany the chairman.

Only in the fifth series does Mao’s portrait monopolize all the space on the renminbi. (See top image.)

There are a number of ways to read this change. One might be that it simplifies and perhaps even overturns the communist revolution. Instead of scenes from farm and factory, men and women on the march, busy building a future, the renminbi features the static image of a single leader and eschews any portrayals of socialist realism. Another might be that Mao’s monopoly on the renminbi exemplifies the continuing and unresolved contradictions of a government that must balance Communist rhetoric with continuing market reform. In either case, when opening a wallet and pulling out a pink 100-yuan note, we aren’t just taking out money — we’re interacting with living history, and a potent political symbol.

3 Responses to “Mao And Money: The Evolution Of The Chinese Banknote”