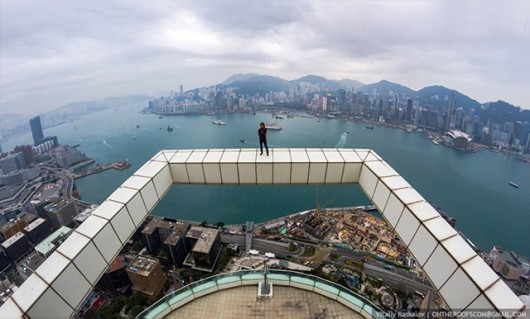 Vadim Makharov and Vitaliy Raskalov over Hong Kong, via Shanghaiist

Heaping it on at this point. “The chairman of Bloomberg L.P. said in a speech here on Thursday that the company should have reconsidered articles that deviated from its core of coverage of business news, because they jeopardized the huge sales potential for its products in the Chinese market. // The comments by the chairman, Peter T. Grauer, represented the starkest acknowledgment yet by a senior Bloomberg executive that the ambitions of the news division should be assessed in the context of the business operation, which provides the bulk of the company’s revenue. They also signaled which of those considerations might get priority.” (NY Times)

At the now infamous Lido Hotel. “At the Beijing hotel that Malaysia Airlines has used as a help center, relatives of Flight 370 passengers gathered in a conference room to watch the televised Australian briefing. The mood shifted to somber disbelief at the Australian announcement that satellite images detected objects in the Indian Ocean near one of the areas being searched for the missing plane. People left the room, with heads hanging. Four women cried.” (WSJ)

Corollary: “In Defense of Endless Flight 370 Coverage.” (The New Yorker)

Beijing subway fees increasing. “Headlines in Friday’s Chinese newspapers make it official: The Beijing Subway network will switch to distance-based pricing at an unspecified point in the second half of this year. // No indication was given as to what the price increase would be, but city planning officials seem committed to basing the fare on some interpretation of ‘international standards’ in which approximately 10% of an urban dweller’s income typically goes towards commuting.” (the Beijinger)

I suppose this counts as a self-promotion. “On March 18 at The Bookworm in Beijing, Anthony Tao from Beijing Cream headed a  panel of well-known China bloggers, including Jeremy Goldkorn founder of Danwei, Mia Li from Sinosphere, Alec Ash founder of the Anthill, and Tao Stein creator of the Weibo and Wechat microblogs 石涛讲故事.” (The World of Chinese)

Tibetan Mastiffs are great when they’re not being killed in the street. Is that what we’re saying? “A Tibetan mastiff puppy has been sold in China for almost US$2 million, a report said on Wednesday, in what could be the most expensive dog sale ever. // A property developer paid 12 million yuan (US$1.95 million, HK$15.2 million) for the one-year-old golden-haired mastiff at a ‘luxury pet’ fair on Tuesday in the eastern province of Zhejiang, the Qianjiang Evening News reported.” (AFP)

Permission totally unnecessary, until one gets caught. “The Prime Minister’s office is demanding a Chinese immigration agency remove a picture of John Key from its website, which appears to show he endorses the organisation. // The China-based agency’s website said it had been working in New Zealand immigration for 10 years and claimed to have helped with 20,000 applications.” (The New Zealand Herald)

Hmm. “In China, air purifiers and masks seem to offer little consolation to a citizenry often galvanised by periodic outbreaks of air pollution. Now, helping people fight the toxic air is state-owned insurance company Ping An, which promises to pay out claims to policy holders when air pollution index exceeds set levels. // Smog insurance, the first of its kind, is targeting travelers and local residents of seven cities. Some of the designated cities, including Beijing and Shijiazhuang, have been plagued by smog for years.” (Global Voices)

Reform without causing the state’s collapse? “Xi Jinping and his supporters have laid out China’s most ambitious reform agenda in more than a decade. Implementing it will not be easy. Overcoming the vested interests stacked up against reform will test Xi’s skills as a politician and as a political strategist. He has already demonstrated significant talent on these fronts, but success is not guaranteed. As he seeks to push through his reform agenda, he must also do so while maintaining political stability in the face of huge changes to the political and economic arrangements that have underpinned the Party’s power over the last decade.” (The National Interest)

Zhou Yongkang update. “The greatest unsolved mystery in China right now is not the disappearance of Malaysian airliner MH370 but the fate of Zhou Yongkang, the feared former head of China’s security apparatus. From 2007 to 2012 a member of China’s top political body, the Politburo Standing Committee, Zhou is now reportedly under investigation for corruption, casting suspicion on hundreds, if not thousands, of his of his allies, subordinates, and relatives.” (ChinaFile)

“‘This Isn’t the Democracy We Want’: Some Chinese Dismayed by Taiwan Occupation.” (China Digital Times)

“Max Baucus Still Standing in Local Starbucks, Waiting for Someone to Notice.” (Ministry of Harmony)

“Being black in China.” (The World of Chinese)

“What Should Michelle Obama Accomplish on Her Trip to China?” (ChinaFile) 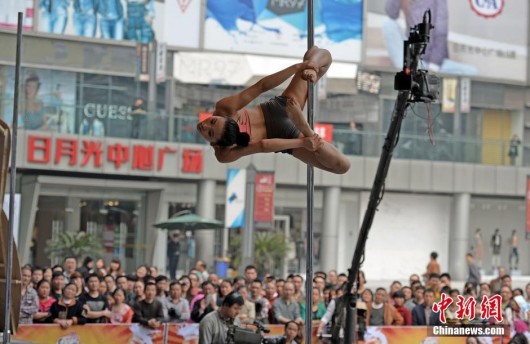 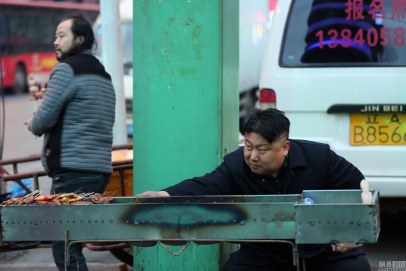