When it comes to toadying up to authority, you can’t beat foreign business. While smog comes and goes like a dissident in the night, its legacy lives on — for example, in the missive below from Savills, the London-based real estate agency, which wins our coveted Beijing Cream Corporate Whore of the Month Award with “Twelve tricks to protect you from haze.” 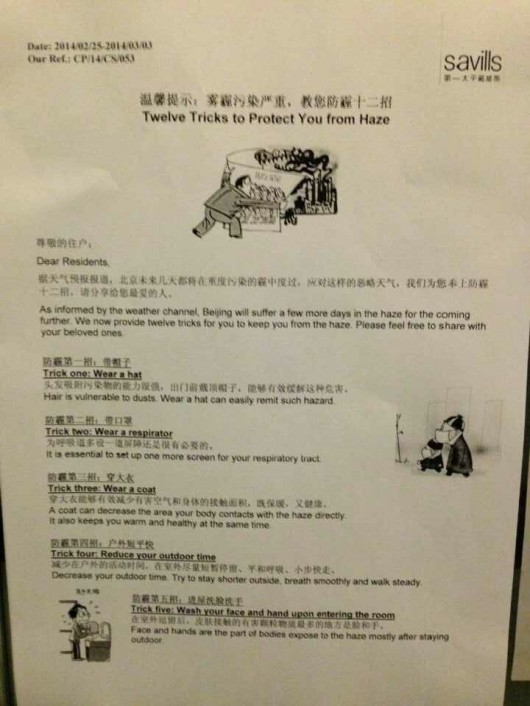 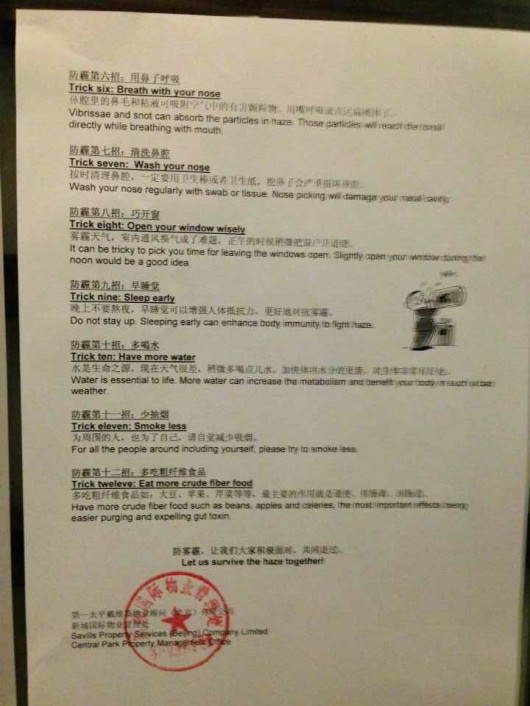 What exactly is “haze”? A nightclub — or do they mean the noxious pall of manmade fumes that hangs over the city like a perpetual funeral veil?

It’s smog, Savills. Smog. Which kills. You don’t have to play silly buggers with the word. Even the English-language dailies have given up fanciful uses of “fog” to describe the shit they’re breathing. Look, here’s a critical Global Times article that uses “smog” in the headline.

Anyway, here’s some of that time-proven Savills advice:

It’s like listening to a lecture from your Chinese grandmother. Yes, we should be encouraging people to wash their hands more — bathroom hygiene is very much in its infancy here, especially among chefs, I’ve noticed — but some of Savills’s advice (“wear a hat”) is barmy.

The only really helpful “trick” — “wear a respirator” (an unfortunate mistranslation for “wear a face mask”) — is known to mostly everybody, but, crucially, doesn’t specify an N95 mask. (Every time someone’s out in the smog wearing a simple cotton mask, isn’t there an instinctive urge to grab them and shout, “It’s useless, you poor damn fool! Useless!”?)

Most foreigners are wise to this, because the overseas and expat media ram advice about wearing the right kind of protection practically down our throats. Sadly, there’s still plenty of naïveté among others about the risks and preventative measures. And bad advice, however well meaning, is still bad advice.

Like this: “Open your window wisely” makes sense, but (Dr. St Cyr again) “Opening at noontime makes no sense.” Why noon, exactly? Does the AQI have a schedule? Does the smog take lunch? Dr. St Cyr: “Their advice for a high-fiber diet is generally good because it implies a healthy anti-oxidant boost — but certainly not because of any ‘expelling gut toxin’ benefit.”

The doc also reiterated his point that, as far as smoking is concerned, an average day in Beijing is equivalent to less than one sixth of one cigarette. (What about an average day in Yinchuan?) So that guy standing with his mouth open in the middle of a 500+ AQI day, just sucking the stuff in? He’s healthier than your average bar or nightclub.

Still, if you’re getting your medical advice off Savills, why not fashion tips from the gurus at Knight Frank? Maybe Century 21 can help with your marriage.

One Response to “Savills Is Offering Bullshit Medical Advice: “Tricks To Protect You From Haze””