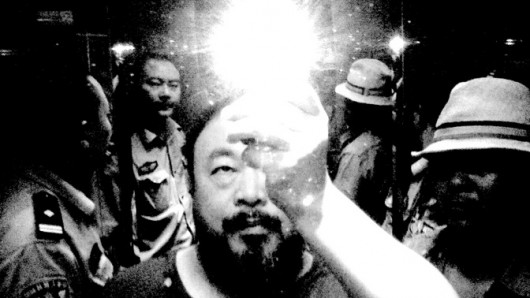 Ai Weiwei has managed to upset and alienate many groups during his reign as China’s national gadfly, particularly within the past five years, a period in which the 55-year-old’s public profile has swelled to supernova proportions. A respondent brought up the “Ai Weiwei Effect” in last month’s roundup of critical reactions to Ai Weiwei and Zuoxiao Zuzhou’s song “Dumbass,” and on the eve of the release of The Divine Comedy – the six-song album on which Dumbass appears — it’s worth asking again: how do we perform aesthetic analysis of the outspoken artist-cum-activist’s work when our perceptions are so colored by sentiment?

Ai’s celebrity status is self-perpetuating and now beyond his control. Short of sealing himself off and banishing all visitors, journalists, and collaborators from his studio while refusing to create and promote — creating and promoting generally being what creative people do — I assume he can’t control who writes about him, who gives him public shout-outs, and how his art will be interpreted by a Western public that still views China, at best, as a cypher, and at worst as a gray-colored dystopia rife with baby-aborting drones and entire cities of enslaved assembly-line workers.

The accusations of shameless headline-seeking behavior will always be there, even as Ai just does what he’s always done. This is, after all, the guy who co-organized an avant-garde exhibition, Fuck Off, that he packed with transgressive content from dozens of domestic artists, including a piece by Zhu Yu called “Eating People,” a depiction of simulated cannibalism that continues to surface online a decade later as anti-Chinese propaganda, and another earlier piece featuring Ai himself famously hurling an ancient vase to the ground as a call to civic action.

We’re talking about the guy who worked with a Swiss design firm in creating the modern-day symbol of an ascendant China, the Bird’s Nest, only to later dismiss the Olympics entirely as a “fake smile” to the world, and the guy who made it his mission to hold authorities responsible for the shoddy construction that led to 5,200 dead schoolchildren after the 2008 Sichuan earthquake. He had his first major retrospective in North America, According to What?, at the Hirshhorn Museum in Washington DC last fall — it’s currently parked in Indianapolis — which has generated extra press because Chinese authorities have forbidden him to attend.

Point is: Ai has always been controversial. His visibility, our perceptions of celebrity, a buffoonish party-state, and the now-ubiquitous presence of social media is the problem — not the man, and certainly not how he chooses to express himself.

A large part of his visibility, ironically, may be due to the authorities’ revocation of his passport, a counterproductive measure that has forced the artist to engage the public online through social media and microblogging platforms that — as Tao noted last month after an impromptu haircut became a public event that even the venerable James Fallows couldn’t resist gushing about — reinforce the cult and farce of celebrity and lend newsworthy status to even the most mundane activities.

Perhaps if the country’s knuckle-dragging simpletons didn’t engage in their perennial goon-squad tactics — shuttering Ai’s blog, harassing and arresting his assistants, administering cerebral hemorrhage, tearing down his Shanghai studio, among other heavy-handed measures — then he wouldn’t have settled so comfortably into his role as Saint Ai, the Romantic Dissident. He wouldn’t be the guy you reflexively sneer at whenever he presents another creative endeavor.

China has a way of alienating everyone, including itself.

Constant media presence comes with blowback. Domestic critics, artists, writers, and others in the country’s creative community often decry the Beijing-born son of a persecuted poet for his vacuum-like effect when it comes to representing the mainland Chinese art scene to the rest of the world; for artificially driving up prices, denying others their moment in the sun, and unnecessarily baiting the authorities, which some say leads to increased scrutiny on a community that is already viewed with suspicion.

The near-consensus among those in China’s expatriate community — or at least the slice that’s plugged into English-language media — is that Ai is a hack who relishes in concocting headline-grabbing PR stunts with questionable artistic merit: whether it’s viral video spoofs, magazine covers, or wry photographs, Ai can do no right. Even the sheer mention of his name by visiting public figures results in withering public scorn.

These people, who endlessly criticize without creating anything of value themselves, also lambaste him for his role as the international media’s go-to guy for quotes on Chinese current events, a gilded position that many argue oversimplifies the complex problems the country faces and feeds lazy Western journalists a distorted narrative of modern China.

And the authorities, lest we forget, remain uncomfortable with Ai’s post-Olympic role as an international celebrity activist calling for the state to rectify its human rights abuses. They continue to assail him with a gauntlet of questionable legal challenges, from accusations of economic malfeasance to crimes against morality, and hold his passport. Ai’s not technically under house arrest, but usually he’s not given much reason to leave his Caochangdi compound.

Zuoxiao Zuzhou has impeccable credentials in the country’s music scene — he’s a well-respected founding father who helped popularize avant-garde rock music in the early-1990s with his band No — so it’s somewhat a musical coup for Ai’s team that Zuoxiao would agree to produce and write the music for The Divine Comedy.

But after listening to the record several times, I still wonder what Ai’s and Zuoxiao’s goals were. If it’s just two friends working together to explore a new creative medium, then we have a success. As a platform for catharsis, working through grueling psychological issues from detention, it’s pretty good. And as a vessel from which to reach a new audience — say, Zuoxiao fans who don’t care about politics — it also works, and I hope that some of Ai’s starpower will rub off on the country’s rock scene and lead to positive developments for everyone involved.

But if Ai intended The Divine Comedy to be a groundbreaking musical statement that rivals what the country’s all-star musical talent has been doing for the past decade, then… maybe not. Domestic acts like Duck Fight Goose, Hedgehog, Carsick Cars, and PK-14 — four rock bands I consider to be the country’s most durable and influential — have him easily beat.

And guess what? That’s okay. I don’t think this record is an attempt to steer national discussion. “Each song is a different take of Ai’s newfound channel for expression through music,” the press release for The Divine Comedy helpfully states, before explaining that the album’s songs fall into three categories: commentaries on current events, documentations of real dialogues, and personal reflections. Aside from a modest two-sentence bio (“Ai Weiwei is an artist and his work encompasses diverse fields including fine art, curating, architecture, design and social criticism. He is a fierce defender of freedom of expression and is always seeking new ways to communicate with the public”) and logistical information as to where to purchase the record — his website, iTunes, and all major online music retailers, in case you’re interested — there’s nothing else.

No weighty proclamations or celebrity endorsements or saucy pull quotes or a multipage hagiography or multimedia ad campaigns, but rather a standard, even minimalist press release announcing to the world that Saint Ai the Creator has given birth to another new artistic thing.

Many domestic pop culture critics will undoubtedly feel frustrated that this record will be the most covered rock music to come out of mainland China this year. While that may be true, it’s predicated on a logical fallacy: Ai can’t be blamed that this country’s independent record labels — the companies who have the economic resources and cultural influence to disseminate this music to Western audiences — tend to be mismanaged, short-sighted, and engage in virtually zero international outreach.

And while the country has no shortage of dedicated participants involved in the music biz — musicians, promoters, writers, venue managers, bloggers, DIY labels, retailers, graphic designers, and other starry-eyed idealists — the overwhelming majority of them don’t have the resources to promote this bubbling cauldron of creativity outside of the country, which is where you need to focus your attention if you want any influential press coverage that’ll generate sustained international interest in your band of choice.

Maybe Ai can help with that.

While the follow-up, “Chaoyang Park,” sounds somewhat dated — those distorted guitar power chords ascending into a dissonant cloud-fuzz have been rendered perhaps a bit too close to Nine Inch Nails’s Broken for critical comfort — it does provide a suitably disorienting environment for the harsh subject matter that lyrically constitutes much of the record:

Are you still following me? I won’t do it anymore
Tell me, what’s your name? Beat me and I won’t tell
Give my cell phone back. Delete those pictures now
I have a wife and a child too. I can’t remember their phone numbers.

I think it’s easy to forget in the wake of Ai’s well-publicized brushes with the law that most musicians in this country shy away from weighty subject matter in their songs — even those in this country’s punk rock scene are guilty of utilizing formulaic flag-waving lyrical bullshit because they’re unwilling to wrap their liberty-spiked heads around anything specific — so it’s nice to hear an outsider not only mentioning the elephant in the room, but tackling it and wrestling it to the ground and trying to yank out its tusks.

And while the muddy, churning mid-tempo sediment of “Laoma Tihua” — a song that appears to recall Ai’s ill-fated trip to Chengdu to attend Tan Zuoren’s trial — was initially a sleeper, repeated listens dredge more interesting stuff up to the surface — nuanced flourishes, like silverfish darting between the reeds as ghouls shriek overhead — and drag it downstream before the current quickly corrects itself with “Hotel USA,” the closest thing on the record to a veritable road banger, a hypnotic effort laced with smoky harmonica curls and druggy campfire chanting.

This song, the first of two arranged by guitarist Zhang Zhe, flows effortlessly, perhaps to a fault, into “Give Tomorrow Back to Me,” an autopiloted ballad that eventually reaches liftoff when Zuoxiao steps in to handle the chorus: this interwoven forlorn crooning cradled in accordion whorls, guitar fills and the almost perceptible swirls of marijuana smoke makes it a contender for one of the best domestic rock songs that I’ve heard this year.

So despite those minor flaws — namely the sequencing, the unsteady pace and the juvenile lyrical content of “Dumbass,” which leaves the listener with a metallic taste in the mouth (which could have been Ai’s intention) – The Divine Comedy never sounds self-indulgent or narcissistic: it’s surprisingly muted and tightly controlled. Perhaps Ai Weiwei and Zuoxiao Zuzhou accomplished exactly what they wanted, whatever that may have been.

The Divine Comedy will be available tomorrow, the two-year anniversary of Ai Weiwei’s release from detention. Pete DeMola is a writer and creative consultant in Hong Kong. He tweets @pmdemola.

CORRECTION, 6/22, 8:03 am: Two corrections have been appended. First, Zhu Yu’s piece on cannibalism was not shown in Ai Weiwei’s exhibit as previously stated. Second, due to an editing error, we misidentified the exhibition that featured Ai’s pictures of himself smashing Han Dynasty urns. We regret the errors.

10 Responses to “Saint Ai, The Musician: The Divine Comedy, Reviewed”