This morning around 9 o’clock, a five-storey apartment building in Fenghua, Zhejiang province collapsed because it was old. (We’re not sure what the technical term might be.) Details are scarce, but CCTV News reported around noon that up to five people had been rescued, though an untold number remained buried.

The building had four units, one and a half of which simply crumbled. Here’s a picture via Shanghai Daily: 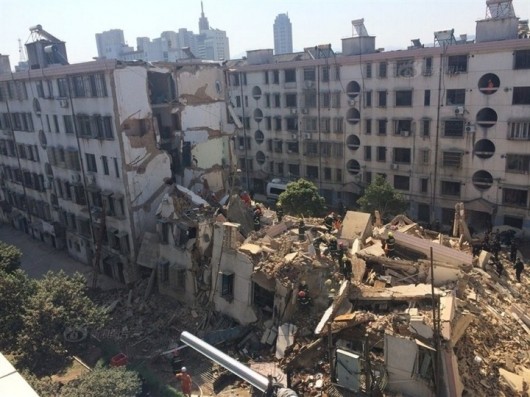 So far, six people have been pulled out of the rubble and sent to hospital, where one woman died, the city government said on Fenghua Announces, its official Weibo account.

A building that collapsed in Fenghua, Zhejiang province, on Friday morning killing a woman, was registered as “unsafe” in December but no remedial measures were taken.

The woman was among seven people trapped after the five-story residential building crumbled to the ground at 8:45 am. All were pulled from the debris by the evening, but Chen Yuexiang, 68, died at a hospital.

UPDATE, 4/9, 1 pm: Two have been arrested, according to Shanghai Daily:

Two people have been detained by police and a third released on bail in connection with a fatal building collapse in eastern province Zhejiang.

A statement yesterday by Fenghua City local government did not identify those involved nor give details on why they had been held.