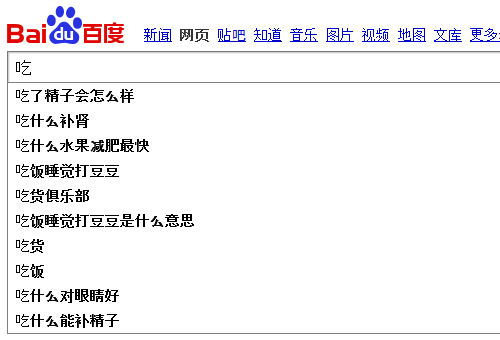 Ran E. of the the Chinese food appreciation blog FOODragon witnessed something interesting recently when he typed the Chinese character “eat” into Baidu: the autofill / auto-complete function — which incidentally also likes to reinforce the stereotype that Americans love sluts — suggested this as the top hit: “吃了精子会怎么样” - Eating sperm can lead to what?

The last suggestion was, “Eating what is good for sperm?”

As Ran, ever the academic, observes:

From an academic point of you this is quite interesting because in Chinese there are strict rules about when use the verb ‘eat’ and when to use the verb ‘drink’. The verb eat is only used for actual solid food which requires chewing. Even soup and Porridge are not eaten but drunk in Chinese.Therefore it could be argued that the verb ‘to drink’ is more appropriate linguistically speaking. Then again, in Chinese babies “eat breast milk” (吃奶) so maybe the rules are different for liquids with high levels of vitality…

I’ve taken it a step further and actually pressed ENTER on “吃了精子会怎么样.” Let’s just say the results were unsurprisingly NSFW-ish.

The top two hits were the anodyne 120ask.com and Chinese Wikipedia (zhidao.baidu.com), but some of the answers were, um, less than helpful. “There’s no cure,” one person wrote.

And then, somehow, I was led to this – my translation below — and I realized: people are earnestly asking what happens when you eat sperm because they want to know if there’s pregnancy risk. Of course! Lacking sex-ed in most places, where else but the Internet are people going to turn for such answers?

What happens if you eat sperm? Lots of people want to know if eating sperm can cause pregnancy, if it’ll make one pretty…

Wait a minute. Make one pretty?

Let’s learn together what sperm is made of, find out what will happen if you eat sperm.

The website is baike.PCBaby.com.cn. I just don’t know anymore.

3 Responses to “Fun With Baidu Autofill: “Eating Sperm Can Lead To What?””