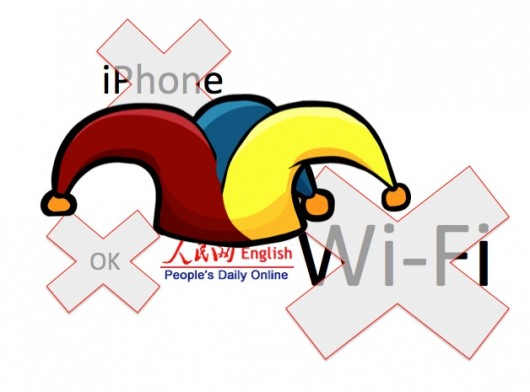 People’s Daily deserves not our scorn but our patience and understanding. I make the comparison with autism with absolutely no intention of being insulting to autistic people or their family and friends, and please accept my apologies if this still sounds offensive. But maybe the proper response to People’s Daily — which has underdeveloped communication skills (despite being the official mouthpiece of the government), difficulty grasping abstract concepts, and fantasies that are simply untenable in the real world — should be with tolerance, composure, and encouragement?

The Communist Party mouthpiece People’s Daily has been waging a war on the direct use of non-Chinese words such as “iPhone” and “Wi-fi” in the Chinese language. The paper has published two editorials in the past week, claiming that “mingling foreign words in Chinese has damaged the Chinese language’s purity and undermined communication”.

The concerns come at a time when popular English terms and expressions have become more commonly used in the daily life of the Chinese than ever, as they embrace western cultural products such as Hollywood blockbusters and British TV dramas like Downton Abbey and Sherlock.

The articles question why the Chinese language had to include English abbreviations while similar terms borrowed from other languages, for example “kung fu”, are always translated into English letters in English-speaking nations.

4 Responses to “Please Be Kind To People’s Daily, Who Is An Autistic Child”