Most people know better than to eat street malatang, which — if you don’t know — basically consists of pieces of veggie and tofu and fish balls and squid and other indecipherable foodstuff stabbed on sticks and boiled/drowned in oil and spices. It’s disgusting and no one likes it. But sometimes, because you’re drunk or too prideful to say no to a dare, you do eat, and your stomach dies a little.

20-year-old Yu Yue has been critically ill after eating boiled spicy vegetables (“麻辣烫”,a variation of hotpot) since a month and half ago. She was diagnosed gastrointestinal perforation and severe infection by the PLA Air Force General Hospital at Beijing, where her conditions improved a lot with the treatment, but the cause of the illness is still a mystery.

You can check out her misery in the video above, but we don’t recommend it. She’s a student at Yunyang Teacher’s College in Hubei province who ate malatang with old classmates in Jilin province on March 18. That same night, she checked into a hospital “with symptoms of abdominal pain, diarrhea, nausea, vomiting and fever.”

She was transferred to a Beijing hospital, and lots of internal bleeding later, she appears to be doing better — but not fully recovered. Doctors at the PLA Air Force General Hospital in Beijing reportedly don’t know the cause of illness. “Malatang” should suffice, no?

Yu’s parents have spent all their savings on her medical treatment. They even own the PLA Air Force General Hospital about 50,000 yuan (about $7936) for Yu Yue. They admitted to Beijing TV Station that for several times, they’d been thinking about bringing Yu Yue home and just waiting for her death. Now organizations are raising fund for Yu Yue from the public.

Be careful about chuan’r, too. As for malatang — let this be a warning: 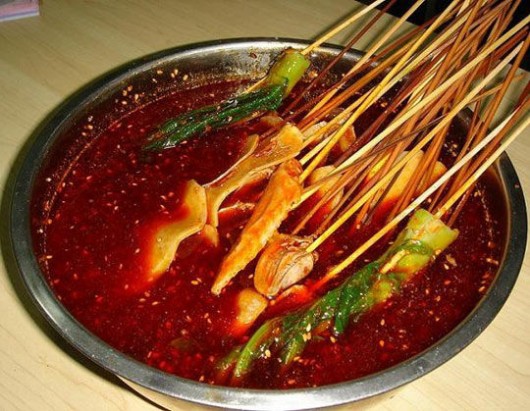