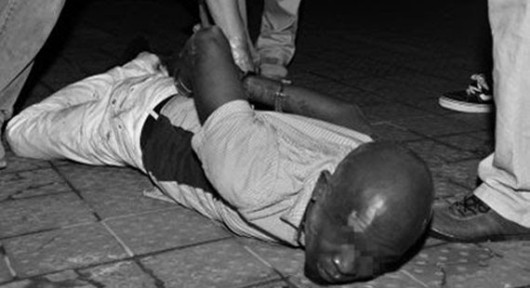 A continuous, in-depth investigation began in early March following a citywide law to combat drug-related crimes, specifically those conducted by foreigners, according to China Daily. The investigation came to a head on May 15-25. The Beijing Public Sec Bureau Narcotics Corps, aided by reporters and “drug addicts” (see: rat), conducted a series of sting operations around Sanlitun Village, Dongba, and East Second Ring Road.

On the evening of May 22 at 10:22, drug addict N is persuaded by the police to voluntarily redeem himself by agreeing to go to a foreign drug traffickers apartment on East Second Ring Road in front of the transactions.

At night 10:48, two black-skin expatriate men appeared in front of the apartment, and defecated in the grass. N exchanged information with the drug traffickers, and the dealers said they reached the trading location. Then Liangmingshenfen investigators attempted to arrest the two. After the two men appeared to see someone, they dropped their possessions and attempted to escape. They were quickly caught.

Beijing Police announced that the purpose of this investigation is to ensure social stability and to avoid the adverse social impact of drug trafficking.

In other news, the Great Wall Music Festival is this Sunday! You’ll need to be a bit more diligent in preparing.