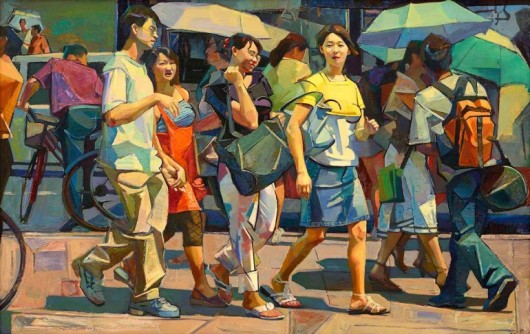 Pan began his art education at the Guangzhou Academy of Fine Arts, graduating in 1987. He spent the next decade continuing his studies at Tama Art University in Japan.

After a year of studying oil painting in Europe, Pan returned to China. In 2003, he enrolled as a PhD candidate in the Central Academy of Fine Arts and stayed on at the academy to teach after graduating.

Drawing on his years abroad, Pan has created a number of oil paintings describing daily life in the urban cities of Japan and Europe. Most of his paintings are held by local museums and foundations.

Early in his career, Pan painted spring, summer and autumn scenery that was free of people. But as the years went on, he began adding crowds, sharp lines and sketches of bus or subway stations.

Soon after, Pan turned his attention to individual shoppers or workers: their families, their joy and their happiness. His most successful works include “Mother and Her Children,” “Naughty Boys” and “Seeking Happiness.”

“Pan Hao has clear control over the three-dimensional character of his work,” said Jia Fangzhou, curator of Pan’s solo exhibition. “He is a painter who pays careful attention to the shape and appearance of the characters in his works.” 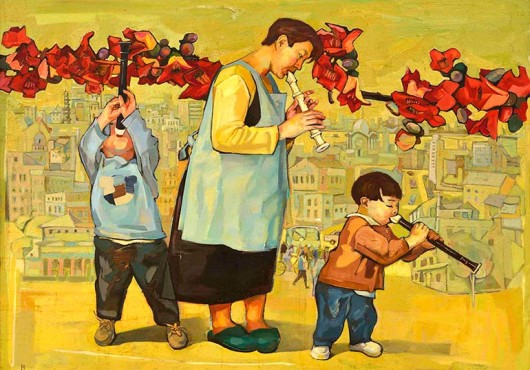 What helps you give your characters such rich texture?

I used to paint the seasons, but gradually I felt that approach would lead me to a dead end in oil painting. In Japan, we had strict classes and learned the style of impressionist artist Paul Cézanne.

So that’s the approach I still follow today, and it’s the style I will teach my students since it is so good for creating detailed characters.

Do you reject other painting styles?

I wouldn’t say that. I’ve learned many different styles and am always prepared to try more.

How can you spare time to paint while teaching?

You can always make time for anything you truly enjoy: time management is an essential life skill. That’s something I always try to tell my students.