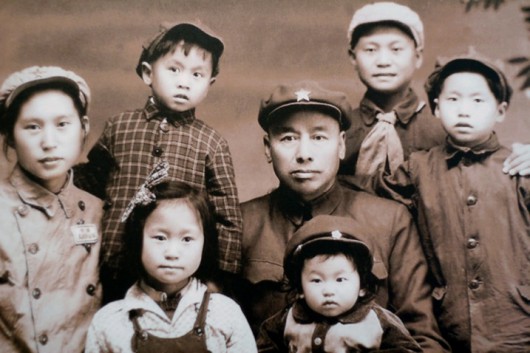 The Bingtuan, as the Corps is referred to by locals, is a state-sponsored farm system spread across the territory of Xinjiang — an area as large as California, Nevada, Utah, Arizona, and New Mexico combined. Hundreds of regiments are still in operation 60 years after their founding. Out of this population of around 3 million military farmers, 90 percent are Han. 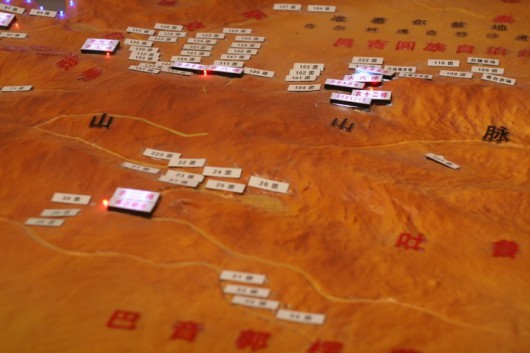 The exhibition begins with giant images of people (at that point, in the early 1950s, mostly men) tilling the soil by yoking themselves together in the place of horses or tractors. The mission of these rehabilitated Guomindang soldiers and reassigned members of the People’s Liberation Army was to claim the soil for agriculture. They dug ditches, carrying away dirt in wheelbarrows; they carried bricks on their backs and “ate bitterness.” 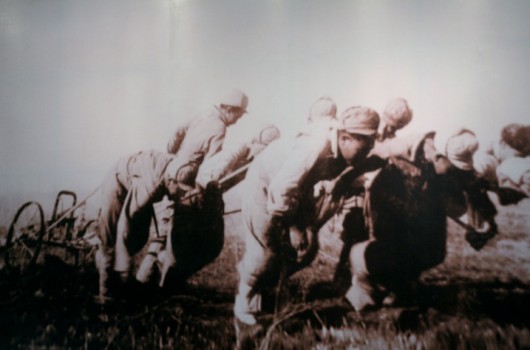 The museum highlights the heroism of these people. In a material illustration of Lei Feng’s sacrificial spirit it shows us the patched coats and socks of these military farmers. Combined with the visceral images of brave suffering in frigid desert winters, these artifacts drive home how extreme the conditions were. We are invited to consider the way water was drunk from dented canteens. Through a wax, wood, and earth diorama we see how the first settlers lived in subterranean rooms dug out of the desert floor. 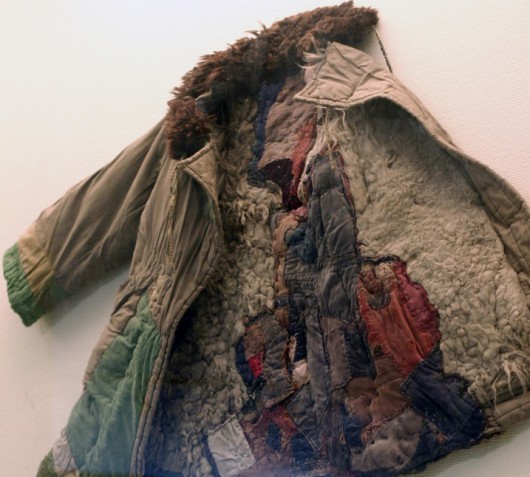 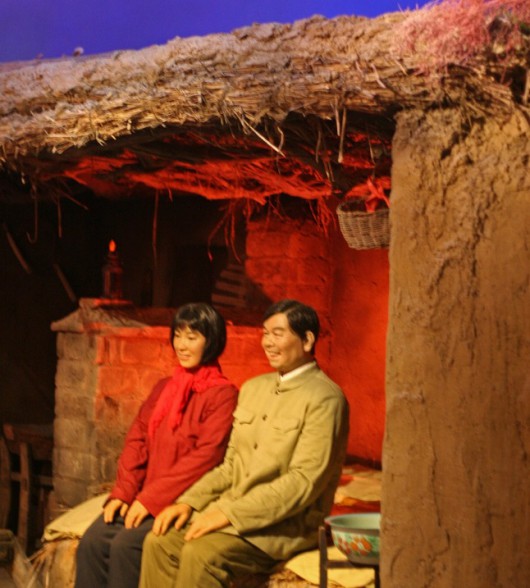 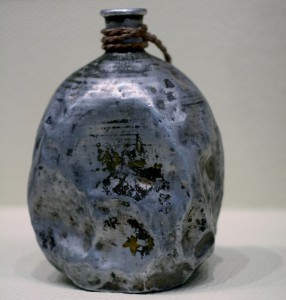 There are images of families, of school children, of choral groups singing Red Songs; there are images of new waterways, of giant vegetables, of new cities. In an elliptical way the exhibit highlights the features that often dominate Western retellings of this history. There is an alcove dedicated to the poet Ai Qing, the famous father of the infamous Ai Weiwei. There are images of Ai with famous intellectuals; a few lines of his verse, but there is little explanation of why he was exiled in the late 1950s to a penal colony within the Bingtuan apparatus.

Even more interesting is a brief retelling of the story of the teenage brides from Shanghai that were rusticated to Xinjiang during the Cultural Revolution. Hundreds of thousands of Shanghaiers were sent to work on Bingtuan farms in the early 1960s. All of these stories of struggle and hardship deserve our attention, but the story of forced marriage of young women to soldier farmers are perhaps the most poignant. Rather than being given military status, these teenagers were relegated to “housewife” status (jiashugong). By not granting them the salary and pension of their male counterparts while at the same time blocking their means of return to their hometowns, this policy forced women toward marriage and thus security. The exhibit invites the viewer to consider this story and highlights the way these women still feel the effects of this reshaping of their lives by showing us images of contemporary reunions of Xinjiang’s Shanghai girls. 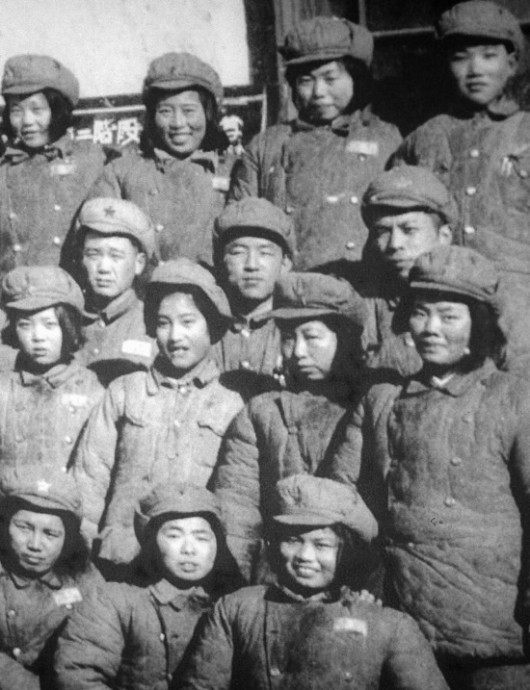 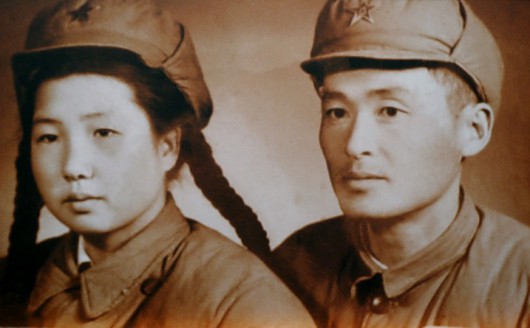 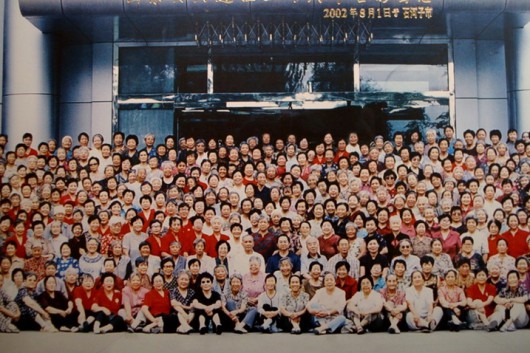 The exhibit ends with an accounting of what has changed in the reform period. All the way through the 1980s Bingtuan farmers were desperately poor. Although they were government employees, the children of Bingtuan farmers often felt they were being born into a life sentence of hard labor. Unlike the flexibility and nominal autonomy of farmers with generic rural household registration or the privilege of those with urban status, those with Bingtuan status often experienced a predetermined life course in which one’s labor was not his or her own. Whole families lived on monthly salaries of 40-50 yuan.

But in the mid-1990s, for-profit oil and gas industries arrived along with new infrastructure and national and transnational markets. Today, the Bingtuan has eight publicly traded subsidiary companies that specialize in information technology, plastics, international trade, alcohol, paper, electricity, and cement, in addition to more traditional products such as cotton, tomatoes, fruit, and sheep. The exhibit highlights how bright the future looks for the children of a secure Xinjiang Bingtuan. 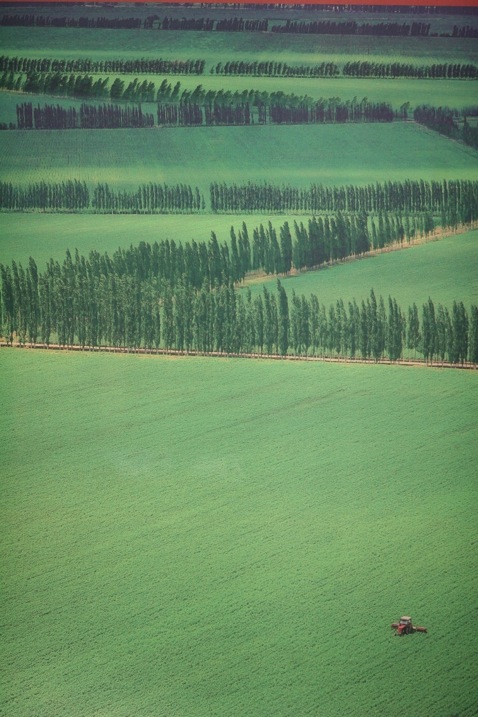 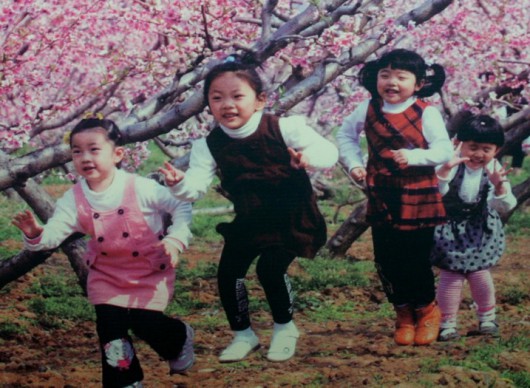 The marginalization of national minorities haunts the narrative of the Bingtuan’s transformation of Xinjiang. Uyghurs appear on the sidelines watching demonstrations of new technologies for turning land into communal farms. They are shown applauding the arrival of great ditches across their land. They sit on the sidelines of Bingtuan heroism.

The museum — telling the story of how Xinjiang was made and what it has become — is free and open to the public.

5 Responses to “Dispatches From Xinjiang: The Story Of The Production And Construction Corps”