The second of our five readers from Flash Fiction for Charity. Also see: 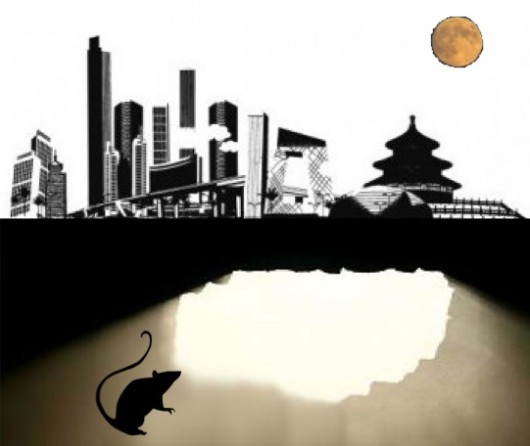 I had a dream last night. Mother says rats don’t dream, but I do. I dreamt I boarded the Line 1 subway and sat on a chair between a businessman with ill-fitting trousers and a young girl with taped-up eyelids. People saw me there and frowned because one little rat was taking up the whole seat. I didn’t get off, even after Jiangguomen.

25 generations ago, some relative of mine went out as far as Tiananmen. It was a time when the humans above were getting all excited. There was noise, fire, and lots of food waste in the relatively new subway. He found an untouched bag of sunflower seeds in a gutter, ate the whole thing, and almost died of constipation afterwards.

Mother likes talking about the old family. “It’s important to know where we came from,” she wheezes. I come from some dusty gutter in a Pingguoyuan hutong. The downtown rats say that’s not even Beijing. “It is,” I insist. “It’s on Line 1.” “Pingguoyuan?” they ask, possibly in earnest. “Never heard of it.”

But actually, many rats live much farther than that. Dad had friends who actually lived in fields where they ate corn all summer and froze to death in winter. Dad went out there one fall and didn’t come back. Mom said he probably tried hibernating, and failed. Once she speculated that maybe he bumped into a horse. “Horses and rats aren’t fond of each other,” she always says, but she’s pretty old-fashioned. Anyhow, she holed up for one full day in a discarded motorcycle helmet, weeping quietly. After that she never mentioned him again.

“Okay,” she mutters. “Just not that weird stuff again.”  Mother doesn’t like foreign food. Says it’s unhealthy, not natural; complains because she knows I like it.

Seven generations ago was that time when all those strange-smelling humans came out to the city. “From the other side of the ocean,” my great aunt informed me. Things changed a lot around then. The city and subway got much bigger. Now rats from far away can meet up, the pool of mates increasing exponentially.

“It’s not right for you,” Mother sniffs, pushing her nose along the wall. “City rats aren’t like us. They think differently. Haowen went to Fuxingmen but was forced out. Dingguo went to Baochao and had his hind leg gnawed off by a wild ferret, can you believe that? A ferret!” I shrug and yawn as always.

Last week, I told her that Mimi met a rat whose dad came over from America on a boat. “America,” she humphed. “Why would a rat from America come to Beijing? Haven’t you heard all those Beijing rats want to cross some ocean?”

I scratch and stroke mother’s neck and tenderly gnaw the base of her tail before departing. “What’s this?” she giggles. I hide my face. “Nothing. Just saying bye.”

I head down a disused subway track to meet Mimi, just past the toilet’s acrid smell.

Mimi’s there with her friend. His eyes are sly but alert. Claws, impeccably sharp. “Roger,” he says. That’s his name. “Yeah, my dad digs Beijing now. Says all rats originated from China, so he wanted to check it out.”

Roger smiles, showing off his incisors. “Downtown’s great. You should come too, Mimi.” She squeals giddily. “No, no, no!”

Roger turns to me. “Ready?”

But I’m already heading toward where the silver rails disappear.

“Whoa dude, where you going?” he laughs. “You’re not gonna walk there.” He’s serious. Obviously. The track is vibrating. Mimi’s turning in circles.

“It’s cool. Just stay with me.” Roger scurries onto a ledge. The train roars in with a deafening shriek. He leaps, leaps onto a spring behind the wheel and disappears above. I don’t know what’s happening. Mimi’s squeaking behind me. I’m on the spring. “Climb up!” Roger screeches. The machinery around me is alive, heaving and groaning. My feet slip on the oily surface, but I manage to clamber up. Roger laughs. I try to, but fail.

I’d thought I’d go downtown, look around a bit, and return home. But the ground below had turned into a roar of blackness and wind. I think about how little mantou I’d hidden away for mother. Roger’s no longer smiling, also trembling in the wind. “Don’t worry,” he shouts. “You’ll like it.”

3 Responses to “Flash Fiction: “The Antecedents Of A Rodent””