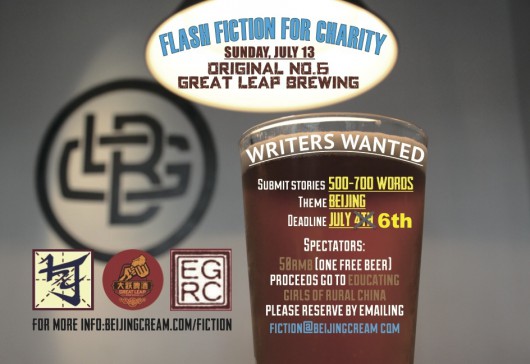 UPDATE, 7/5, 3:51 pm: It’s come to my attention that not all emails to fiction@beijingcream.com are going through. If you’re submitting, please use this email address. UPDATE, 7/6, 11:59 pm: The problem has been fixed! If you did NOT receive an individualized confirmation of submission receipt, PLEASE SEND AGAIN as soon as possible. Apologies for any inconvenience.

We’re extending our flash fiction deadline. Submit stories 500-700 words before 11:59 pm this Sunday for a chance to read your piece over beers at Great Leap Brewing’s Original No. 6 courtyard on Sunday, July 13. If you need any inspiration, check out the piece that just went up on the Anthill about the heartache of being alone in a city of 21 million.

She was an art student from Beijing, and said she drank so she could get a good night’s sleep. I wondered what personal tragedy, heartache or sadness was at the bottom of her glass.

Since the beginning – ab ovo, to borrow from Tolstoy — fiction has attempted to render reality in way more meaningful than reality allows. (“Fiction is the lie that tells the truth,” says Neil Gaiman.) It slows down our world, magnifies and captures in a snowglobe the moments that deserve to rest beside our bedstand. Or it speeds it up, elides those insignificant routines we shuttle into deep storage for our future bedridden and blind selves to revisit.

Is that overstating it? Let’s see. Terence said in the 2nd century BC that “there’s nothing to say that hasn’t been said before.” Maybe fiction, in our modern day and age, has been subsumed by other media such as television or music or even journalism, or Twitter. Why can’t all the elements of a good story be contained within 140 characters? David Shields wrote in the manifesto Reality Hunger – from which I cherry-picked the above Terence quote — about the “lure and blur of the real,” specifically a burgeoning “artistic movement” that relies on reader recognition and viewer participation. It’s the spirit of stand-up comedy injected into a book reading.

Alas, call me old-fashioned, but I still believe in the special ability of fiction to enable lateral thinking, to trigger unique feelings or surprising remembrances: how, for instance, Steven Millhauser’s story about thirteen wives can make you recall a singular someone; or how you can chat with a cab driver in the local patois and think of Mongol slaves or court eunuchs (that’s the premise of the Beijing-based novel The Incarnations, the author of which, Susan Barker, will be reading at our event). Allow yourself to imagine the ghost of city walls or what’s implicit in the movement of elderly dancers in yangge’r. We’re not asking for a recreation of that drifting trash bag scene from American Beauty, but Beijing does lend itself to metaphor, doesn’t it?

Fiction is calisthenics for the brain, scattershotting the matte plane of verbal lexicon with sparks of red and orange and midnight violet. It’s the joy of coming up with an idea, and the satisfaction of reifying — for eternity — an instinct or construct or thing that heretofore floated in the realm of dark matter. It’s autodidactic and liberating and fun. Lock yourself in a room this weekend and give it a try. You might be surprised. As Picasso said: “What I capture in spite of myself interests me more than my own ideas.”

Whether you believe in meliorism — that individual effort matters, like the lonely dissident engaged in Chinese striving — or its opposite, cynicism, and prefer watching concrete and hope fall in accordance with natural laws of gravity, it doesn’t much matter for our purposes. Just express yourself, as a pop star once said.

Of course, we’re not that old-fashioned. (I mean, come on.) That’s why we’ve paired our event with beers (and a charity!), and we intend on this being a fun community outing. Do consider attending — reserve your seat by emailing us. The 50 RMB door fee (all proceeds go to Educating Girls of Rural China) will get you a free GLB beer.

In the meantime, enjoy your Fourth of July plans, Americans. Everyone else: enjoy drunk Americans. Try not to pass out in Sanlitun – though that’d make for one hell of a story.

One Response to “Why Flash Fiction? (Deadline Extended)”